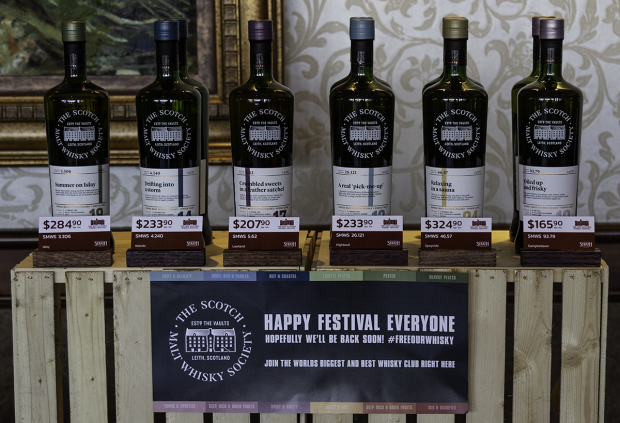 January 25, 2019 – The wheels of justice often turn slowly, and not unlike a good whisky, a legal dispute can often take years to reach maturity. Allura and Eric Fergie don’t want their dispute with the British Columbia government to take that long – since their 242 bottles of whisky now in the government’s custody have already matured for years.

“It was very surreal…it was something right out of Prohibition. They just came in, and they had their truck full of empty boxes, and they were just like ‘yep, we’re here to take your whisky,” is how Allura Fergie describes the morning of January 18, 2018.

The Fergies own Fets Whisky Kitchen in Vancouver, and in what is believed to be the largest coordinated raid by Canadian liquor enforcement agents since the Prohibition era, British Columbia liquor inspectors seized 242 bottles of Scotch Malt Whisky Society whiskies from Fets. Inspectors also conducted simultaneous raids at the Grand Hotel in Nanaimo, the Union Club of British Columbia and Little Jumbo – both in Victoria.

The four are the Society’s “partner bars” in the province. Their crime: purchasing the SMWS whiskies from two privately-owned liquor stores in Victoria and Vancouver that legally sell those whiskies to consumers. British Columbia regulations require that bars, restaurants, and hotels with “hospitality licenses” purchase all of their alcoholic beverages directly from the province’s own liquor stores.

“We shop at six to twelve government liquor stores just to acquire the products we need to operate our business,” Eric Fergie said during an interview at the Victoria Whisky Festival. Private liquor stores, such as The Strath in Victoria and Vancouver’s Legacy Liquor Store, legally order SMWS whiskies and their other inventory through the province’s Liquor Distribution Branch. However, the SMWS whiskies and many others are not sold in the provincial stores, and that gives the Society’s partner bars in the province no legal option to source them.

“The government system is not set up to manage and support small businesses looking for specialty items,” Eric Fergie said. “They’re a big box store, and we go and get the main brands.” In addition, the Fergies have to pay full retail price for all of their stock – then pay additional taxes on the markup they charge their customers.

After the raids, British Columbia Attorney General David Eby created a panel to look at potential changes to the province’s liquor system. That panel, led by attorney Mark Hicken, submitted its report last June with 24 recommendations, including one to lift the ban on private liquor stores selling to “hospitality license” holders.

Last week, Canada’s Competition Bureau entered the debate on the side of the Fergies and other business owners, calling on the provincial government to remove what it deems “anti-competitive” restrictions on the private sector.

“If the province’s stores don’t pick up the products, the products aren’t getting to restaurants and bars and that has implications for competition at a number of different levels,” Associate Deputy Commissioner for Competition Leila Wright told WhiskyCast in a telephone interview. “The bottom line is it’s better for consumers to be able to have these products offered at bars and restaurants across B.C.,” she said.

The Ministry of the Attorney General declined to make Eby or a spokesperson available for interviews, but provided a prepared statement from the attorney general.

“I appreciate that the federal Competition Bureau is interested in our work to modernize and improve our liquor policy and how it deals with hospitality, in particular. I’m a little surprised that they are so interested as British Columbia is not the only province that operates the way that we do, but I’m glad for the letter and will certainly take it in to consideration as we go forward with the review process.”

A spokesperson for the ministry indicated that the Hicken Report’s recommendations are still under review and being discussed with public health experts and labor representatives, with no timetable for a decision on whether to implement them or not. In addition, the ministry and the Liquor Distribution Branch have also been dealing with the impact of cannabis legalization nationwide last October, and the BCLDB is also serving as the province’s exclusive legal wholesaler supplier for cannabis products.

“Cannabis hasn’t been paying any taxes, and us as liquor buyers have been paying taxes for years, so you’ve gotta give us equal time,” she said.

While the other three bars settled their enforcement cases with the province and paid small fines, the Fergies are still fighting the potential loss of around $40,000 (CAD) worth of whisky and a proposed fine of $3,000. Their hearing has been pushed back to this May, and their lawyer has filed open records requests for the province’s emails and other documents leading up to the raids. Their hope is to have the entire case thrown out on the grounds that the raid illegally violated their rights under Canada’s Charter of Rights and Freedoms.

“We also believe that the government will eventually do the right thing and make it go away…they’ve got a lot of outs and can still look good,” Eric Fergie says. The case has received international attention over the past year, along with a #FreeOurWhisky campaign on social media that he believes has helped make visitors to Vancouver more aware of Fets.

“We did get a lot of press, yes…but we’d still rather have the whisky.”

The controversy also had an impact on the 14th annual Victoria Whisky Festival. The Scotch Malt Whisky Society did not present master classes, along with several other independent whisky companies who traditionally depend on the province’s private retailers to serve their customers. A sign next to the SMWS whiskies on sale at The Strath’s pop-up shop in the lobby of the Hotel Grand Pacific noted “hopefully, we’ll be back soon.”

Editor’s note: To listen to the entire interview with Allura and Eric Fergie, listen to Episode 751 of WhiskyCast.