March 5, 2019 – Two people suffered minor injuries today in the second accident in less than a year at Sazerac’s Barton 1792 Distillery in Bardstown, Kentucky. According to Nelson County emergency management officials, a “beer well” storage tank holding an estimated 60,000 gallons of fermented mash failed, while a second tank was punctured and a pipe connected to a third tank failed. The tanks hold “distiller’s beer” after it is removed from fermentation tanks and before it is fed into the stills.

The spill overflowed a holding basin surrounding the tanks, and aerial video from Louisville television station WDRB show the slurry as it flowed into an adjacent parking lot and toward a nearby stream. 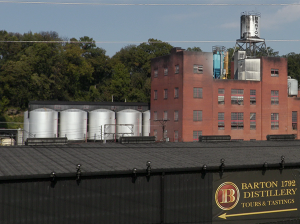 The Barton 1792 Distillery in Bardstown, Kentucky. The spill was located in the area around the tanks on the left side of this file photo.

Distillery workers were able to erect containment berms to keep the flow of liquid from reaching the stream, in a repeat of last summer’s emergency attempts to keep whiskey from a collapsed Barton 1792 warehouse out of that stream. In that case, alcohol from an estimated 9,000 barrels flowed into the stream following the collapse of part of the warehouse on June 22, and was responsible for a large-scale fish kill, according to state environmental regulators. The remainder of the warehouse collapsed on July 4 with an additional 9,000 barrels inside, but the whiskey from those barrels was contained by berms erected after the initial collapse. No cause has ever been publicly disclosed for the collapse of the warehouse.

Two workers were taken to Flaget Memorial Hospital by ambulance after today’s accident, and were released after being treated. Sazerac executives said in a statement that the company is still working to secure the site, and no cause has been found for the tank failure.

This story will be updated as additional details become available.