June 23, 2018 – An investigation is underway into the cause of Friday morning’s warehouse collapse at Sazerac’s Barton 1792 Distillery in Bardstown, Kentucky, where thousands of barrels of maturing whiskey flowed from their “ricks” and wiped out half of the seven-story building. No one was injured in the collapse, which the Nelson County Gazette reports was spotted by someone who saw the damaged “rickhouse” from a nearby road. The local newspaper quoted Bardstown’s fire chief as saying the distillery had been “having issues with one wall of the warehouse, and had been working on it.” Production at 1792 Barton had been shut down at the beginning of the week for the distillery’s annual summer maintenance projects.

Sazerac executives did not address those issues in a news release following the accident. According to the statement, Warehouse #30 was built in the 1940’s and held around 18,000 barrels of whiskey at the time of the collapse. Engineers spent Friday afternoon checking the stability of the other side of the warehouse, while distillery workers and officials from the state Department of Environmental Protection were building dams and dikes to prevent leaking whiskey from damaged barrels from reaching into a nearby creek. At last report, water samples from the creek showed no signs of contamination, according to the Louisville Courier-Journal.

Sazerac executives declined WhiskyCast’s request for an interview, and also declined to answer specific questions on when the warehouse had last been inspected or how often the company inspects its “rickhouses” for potential structural issues.

Sazerac has a total of 29 “rickhouses” at the 1792 Barton Distillery, and more at its other distilleries in Kentucky, Buffalo Trace in Frankfort and Glenmore in Owensboro. In its statement, Sazerac said it may be “several days or weeks” before a full damage assessment is complete or how many of the barrels can be recovered. The distillery produces Sazerac’s 1792 Bourbon, along with a number of other spirits, and the warehouse held a variety of distilled products.

Helicopter video from Louisville television station WLKY showed the collapsed timber framework known as “ricks” that held the barrels in stacks of three. The warehouse was one of 29 at the distillery, which was acquired by Sazerac in 2009 as part of a $334 million deal with Constellation Brands. It is located in a remote corner of the distillery’s 192-acre site, well away from the buildings housing distilling operations or 1792 Barton’s visitors center, which reopened to the public for tours on Saturday. 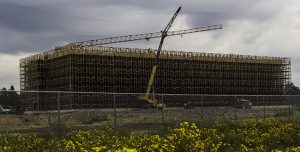 This file photo shows a rickhouse under construction, as the timber framework for the “ricks” that hold whiskey barrels is assembled before the walls and roof are attached.

“Rickhouse” is the common term used for Kentucky’s whiskey maturation warehouses, with the timber frames resting on concrete pads and surrounded by the building’s exterior framework, an elevator shaft to move barrels from ground level to the upper floors, and the thin sheet metal exterior. Rickhouses are typically designed so that the exterior walls do not bear the load of the whiskey barrels in the ricks, and support only the weight of the building’s roof, electrical wiring, and any sprinklers. There have been numerous cases where tornadoes or other severe storms have ripped the sheet metal walls from fully-loaded rickhouses with no damage to the ricks or barrels inside.

Warehouse #30 at 1792 Barton is one of hundreds of older maturation “rickhouses” around Kentucky built in this style, and its 18,000 barrel capacity is in line with industry standards for those warehouses. Following the 1996 fire that destroyed Heaven Hill Distillery and several of its warehouses in Bardstown, the state of Kentucky imposed construction standards on new maturation warehouses that require earthen containment berms to keep spilled whiskey from reaching other warehouses or nearby streams. The standards also established maximum dimensions for warehouses, with the largest ones capable of holding around 50,000 barrels each.

WhiskyCast has contacted Nelson County officials for additional information on the investigation into the collapse. This story will be updated as necessary.