Second Half of Barton 1792 Warehouse Collapses

July 4, 2018 – Twelve days after half of a maturation warehouse at Sazerac’s Barton 1792 Distillery in Bardstown, Kentucky collapsed, the remaining half of the structure has now come crashing down with another 9,000 barrels of whiskey inside. That half of the structure survived the initial June 22 collapse, but the potential for it to come down had structural engineers trying to find a way to shore up the structure and allow for workers to begin removing the estimated 9,000 barrels damaged or destroyed in the initial collapse. In a statement, Sazerac executives said there was no way to stabilize the remaining structure due to worker safety concerns. There were no injuries reported in the second collapse.

A response team from the Kentucky Department of Environmental Protection responded to the site.  Energy and Environment Cabinet spokesman John Mura told WhiskyCast in an email that it appears all whiskey spilled during the second collapse was successfully captured in two containment ponds dug after the June 22 collapse. The Sazerac statement indicated that plans had been put in place after that collapse to have equipment on site in preparation for any additional spills, and that the distillery’s team was able to respond quickly to the second collapse. The state’s response team will be at the distillery on Thursday and has been monitoring the situation since the June 22 collapse, when spilled alcohol killed an estimated 1,000 fish in Withrow Creek and the Beech Fork River. Sazerac is already facing citations for the original alcohol spill and for not reporting it promptly to state officials.

Bardstown Fire Department Chief Billy Mattingly provided photos of the scene, which has been off limits to reporters since the initial collapse. According to WDRB-TV in Louisville, people living near the distillery were asked to not set off Independence Day fireworks because of the potential fire hazard. 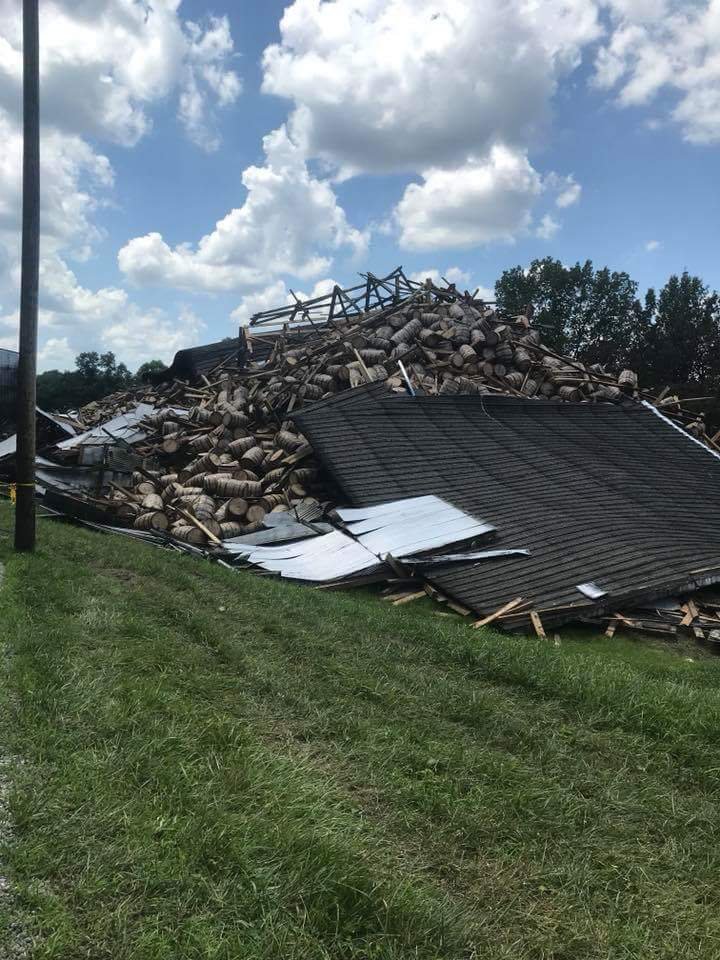 The aftermath following the collapse of the remainder of a whiskey warehouse at the Barton 1792 Distillery in Bardstown, Kentucky July 4, 2018. Photo courtesy Billy Mattingly/Bardstown Fire Department.

The warehouse was constructed in the 1940s, and Sazerac indicates it will likely be several weeks before the cause of the collapse is determined. The company is developing plans for a new warehouse to store barrels recovered from the site. In addition, structural engineers have inspected all of the other warehouses at Barton 1792 since the original collapse. All of those warehouses passed inspection, as did the warehouses at Buffalo Trace Distillery in Frankfort and Glenmore Distillery in Owensboro, Kentucky.

This story will be updated with additional information as necessary, and listen to this weekend’s WhiskyCast for more coverage.

Editor’s note: This story was updated with additional information provided by Sazerac and the Kentucky Energy and Environment Cabinet.