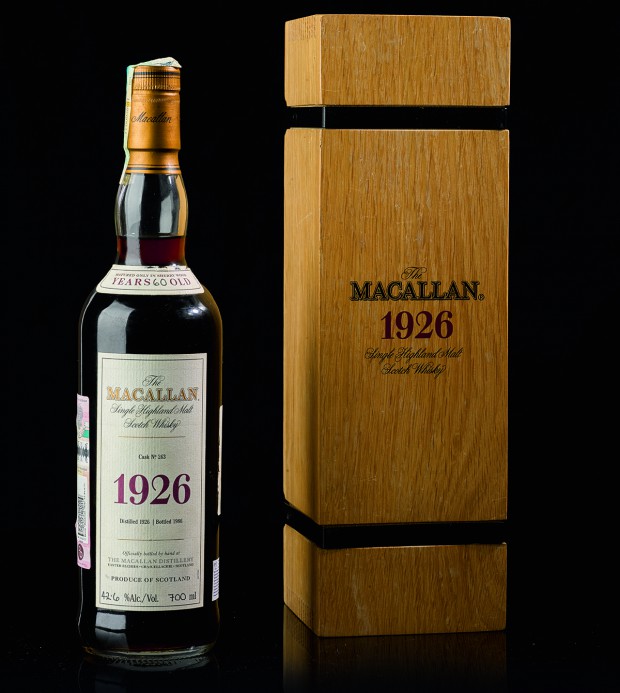 October 25, 2019 – The record price for a single bottle of whisky sold at auction fell like autumn leaves in the wind at London’s Olympia Thursday as Sotheby’s held its first single-owner spirits auction. More than 460 bottles belonging to an anonymous American collector went on the block, bringing a total of £7,635,619 GBP ($9.9 million USD) in bids and premiums.

The “holy grail” of whisky auction records was shattered by a record £1,452,000 ($1,873,951) bid for what has often been described as the “holy grail” of Scotch whiskies, the 60-year-old 1926 Macallan Fine and Rare Series. The winning bid broke the previous record of £1.2 million set last November at Christie’s in London for a 1926 Macallan with a hand-painted bottle by artist Michael Dillon. Like that bottle, this was one of 16 bottles released by The Macallan as part of its Fine and Rare Series out of a total of 40 produced by the distillery, while artists Valerio Adami and Sir Peter Blake each created bespoke labels for 12 of the remaining bottles. 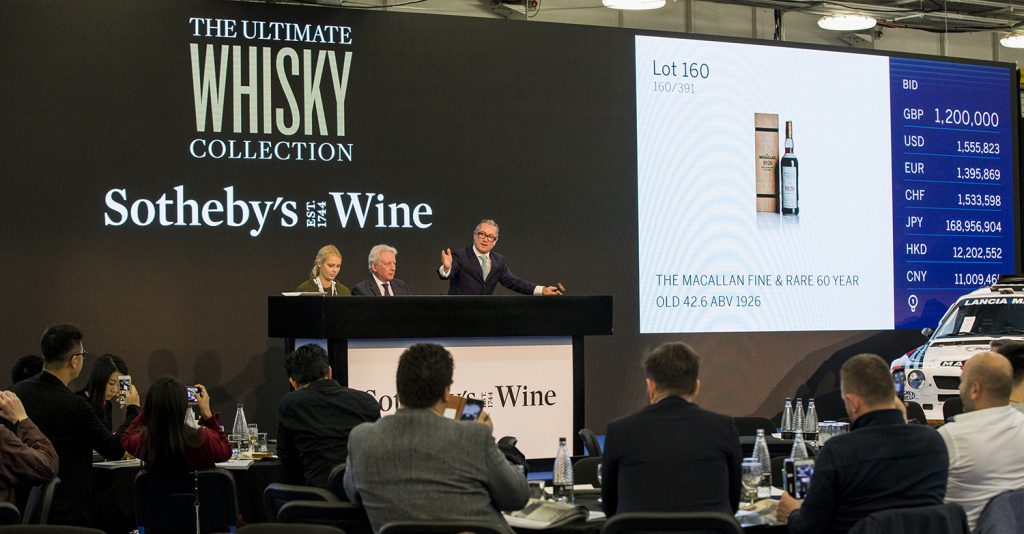 Sotheby’s spirits specialist Jonny Fowle described the mood in Olympia as electric as serious bidders kicked in, both in person and by telephone. “I thought it would go about £800,000, so when it started to slow down, I thought that was probably the end of it at around £650,000, and then it was unbelievable…the energy in the room was amazing and everybody started crowding around, the bids kept on coming in and as it hit the million-pound mark, everyone cheered and then it carried on all the way to £1.2 million,” he said in a telephone interview.

The winning bid came from an anonymous bidder in Olympia, and Sotheby’s declined to release any other information about the winner. As for the “ultimate whisky collector” who decided to sell his valuable collection in one single auction, while he too must remain anonymous, Fowle said the American collector was ecstatic after the results nearly doubled pre-auction estimates in the £4 million range.

A spokesman for Edrington, the owner of The Macallan, declined Friday to comment on the results of the auction, noting that the distillery does not profit from auction sales or other sales on the “secondary market.” However, he noted in an email that “it is a testament to the fine quality and consistent production process of The Macallan that collectors would seek out and pay for the privilege of obtaining such a fine dram.”

A complete list of auction results is available at the Sotheby’s web site. All prices listed here include the Sotheby’s 21 percent premium, which covers commissions charged to both buyers and sellers.

Editor’s note: This story was updated to include reaction from an Edrington spokesman.