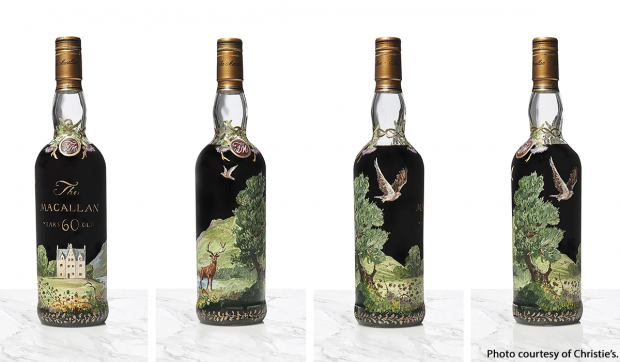 The Irish artist’s one-of-a-kind hand-painted 1926 Macallan shattered the current world record for a single bottle of whisky sold at auction when it went on the block today at Christie’s in London. The high bid was £1.2 million GBP ($1,532,880 USD), breaking the previous record of £848,750 GBP ($1,107,663 USD) set October 3 at Bonhams in Hong Kong by one of the twelve Valerio Adami 1926 Macallan bottles. As is customary, the name of the winning bidder was not released.

Until today, the Adami and Blake bottles had traded places at the top of the world record list. A Blake bottle first broke the record in May at Bonhams in Hong Kong, only to be topped later in the same auction by the Adami bottle that held the record until the October 3 auction. Both of the award-winning artists created a bespoke label used by The Macallan’s owners for 12 bottles each to be used as corporate gifts and offered for sale to select buyers.

Dillon’s bottle was one of 16 remaining from that tranche of 40 bottles of 60-year-old Macallan that became part of the distillery’s Fine & Rare Collection for sale to the public. It was the only one to feature Dillon’s hand-painted scene of The Macallan’s landmark Easter Elchies house with the Cairngorm Mountains in the background, and was sold at London’s Fortnum & Mason in 1999. The bottle had not been seen in public since that sale, and has been regarded as the “holy grail” for Macallan collectors.

In a statement issued by Christie’s, International Director of Wine Tim Triptree MW said “the results confirm the strength of the market for whisky and the continued success of Christie’s in offering the finest spirits to our collectors across the globe.” In addition to the Dillon bottle, Christie’s also auctioned several whiskies provided by Macallan owner Edrington. A bottle of The Macallan 50 Years Old brought a high bid of £72,000 GBP ($92,016 USD), while five bottles of The Macallan Genesis sold for a combined £11,400 GBP ($14,566 USD). Genesis was released earlier this year to celebrate the opening of The Macallan’s new distillery in Speyside, and the proceeds from those five bottles will be donated to Speyside community organizations.

WhiskyCast has requested interviews with executives from Christie’s and The Macallan. This story will be updated with additional information as available.

Editor’s note: Currency conversions in this story are based on the Bloomberg Generic Composite Rate as of publication.