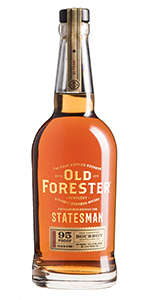 Released in 2017 to coincide with the theatre debut of “Kingsman: The Golden Circle,” this Old Forester expression is made from barrels between four and six years old and selected from hotter locations in the Brown-Forman warehouses. The nose is fruity and slightly tart with red apple, soft spices, a hunt of vanilla, and brown sugar. Like the agents of Kingsman and Statesman, though, there’s more lurking beneath the surface. The taste is complex, tart, and fruity with hints of dried flowers, apples, and pipe tobacco at first, followed by two separate layers of spices. Allspice and a hint of black pepper come out first, followed by a burst of cinnamon and spearmint that lasts through the finish, along with touches of vanilla and oak tannins. Excellent! (July, 2017)