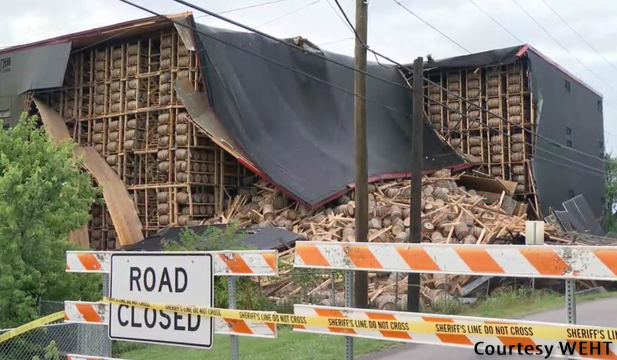 June 18, 2019 – When the phone rings at a distillery manager’s house in the early morning hours, rarely is it someone calling with good news. Jacob Call’s phone started ringing early Monday morning after the discovery that part of a maturation warehouse had collapsed overnight at the O.Z. Tyler Distillery in Owensboro, Kentucky. Around 4,500 barrels crashed to the ground after severe thunderstorms in the area Sunday night, and while engineers will determine the exact cause later, Mother Nature is getting the initial blame.

No one was hurt in the collapse, which came hours before warehouse workers would have reported to the distillery Monday morning. “We’re thankful that it happened at midnight on a Sunday night, nobody was injured, nobody was around…really a blessing that it happened the way that it did,” Call told WhiskyCast in a telephone interview Tuesday just before he was scheduled to meet with local officials to discuss cleanup plans. The road running alongside the rickhouse remains closed to traffic, but distillery operations have not been affected.

Equipment is being staged around the remains of Warehouse H to prepare for cleanup work expected to start Wednesday morning. “We’re sort of treating it as a controlled takedown of the warehouse…there’s really no safe way to get the barrels out with laborers, so we’re going to use a machine and probably take the roof off and just start picking the barrels out of the ricks,” Call said. The warehouse has a capacity of 20,000 barrels, and the collapse affected one corner of the building while leaving the rest too unstable for workers to safely enter it.

As the sun comes up you can see the full scope of damage here at the OZ Tyler facility pic.twitter.com/amGOVDzn8x

Fortunately, there appears to be no major environmental damage from spilled whiskey, as Call said very few barrels broke open in the collapse. “We’re still trying to analyze how much actually broke, but there’s no EPA issues, there’s no river of Bourbon, the grass really isn’t stained…right now, it’s looking pretty good.”

Warehouse H was built in the late 1960’s when the Medley family owned the distillery, and is one of seven rickhouses on the 26-acre site. All of the rickhouses have undergone extensive repairs and ongoing maintenance since Terressentia acquired the distillery in 2014, according to Call. “It was in really bad shape when we got here, and we spent nearly $30 million rebuilding the facility, did a lot of work on all of the warehouses,” he said.

Ironically, this is not the first time Mother Nature has targeted Warehouse H. In September of 2008, the warehouse was heavily damaged when the remnants of Hurricane Ike tore through the Owensboro area and required extensive repairs at the time.

“I don’t know if it’s just bad luck or what,” Jacob Call said.