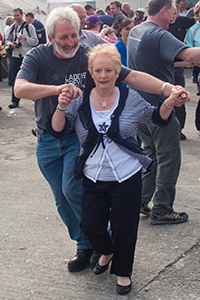 Duncan McGillivray dances with a guest during the Feis Ile ceilidh at the distillery in May, 2010. Photo ©2010 by Mark Gillespie.

March 10, 2020 – Longtime Bruichaddich manager and Ileach Duncan McGillivray has died at the age of 68. McGillivray died last night after several years of failing health, according to Simon Coughlin of Rémy Cointreau, which owns the distillery on Islay.

McGillivray retired from Bruichaddich in 2014 after 40 years at the distillery, where he started out as an apprentice in 1974 and worked his way up to distillery manager when Bruichladdich’s owners closed it in 1994. He stayed on to oversee the site and its inventory of maturing whisky as leader of a skeleton crew until 2001, when Mark Reynier and his investors acquired Bruichladdich and entrusted Duncan with returning it to life.

While Jim McEwan served as Production Director, overseeing Bruichladdich’s whiskies and traveling the world to promote the distillery, his “running buddy” Duncan worked tirelessly to keep the aging plant operating using a lot of second-hand equipment and parts. When McGillivray retired, Simon Coughlin praised him for “his ability to innovate and improvise in the face of seemingly impossible engineering challenges.” In confirming his death, Coughlin described him in an email as “a true gent and a one-off.”

Reynier, who left Bruichladdich following its sale to Rémy Cointreau, credits McGillivray’s inspiration for his decision to found Waterford Distillery in Ireland. Waterford is scheduled to release its first whiskey next month, and in an email today, Reynier noted that he had just completed the label copy for “Pilgrimage” and “name-checked” Duncan McGillivray on the back label for that whiskey. It will go on sale at Waterford’s first open day on April 25.

McGillivray is survived by his wife Susan, daughters Donna, Jenny, and Helen, his grandchildren – and a legion of friends on Islay and around the world. His family has asked that in lieu of flowers, donations be made to the Residents Fund at Gortanvogie Home in Bowmore.