December 17, 2017 – Guinness World Records has declared a Scottish hotel’s whisky bar as having the “largest whisky collection available for sale.” The Glenesk Hotel in Edzell, Angus started building up its collection after Dylan and Alena Wren bought the hotel five years ago. At the time, the hotel had around 200 whiskies available at the bar, but as of September 28, it stocked 1,031 different whiskies – according to Robert Fleming of Angus Dundee, who logged the inventory and certified it in the hotel’s submission to Guinness World Records. According to The Drinks Business, the previous record of 800 different whiskies was held by the Millionaire’s Casino in Ayrshire, Scotland.

Not so fast, whisky lovers. There’s more to the story than this, and while an inventory of 1,031 different whiskies is certainly impressive, it’s just a starting point for a handful of other whisky bars around the world. After the original round of stories on the new “world record,” we started checking with some of the likely contenders among whisky bars known for their extensive collections. For instance, the Jack Rose Dining Saloon in Washington, DC. While owner and longtime whisky collector Bill Thomas was not available for an interview, the bar’s social media team responded to our inquiry. 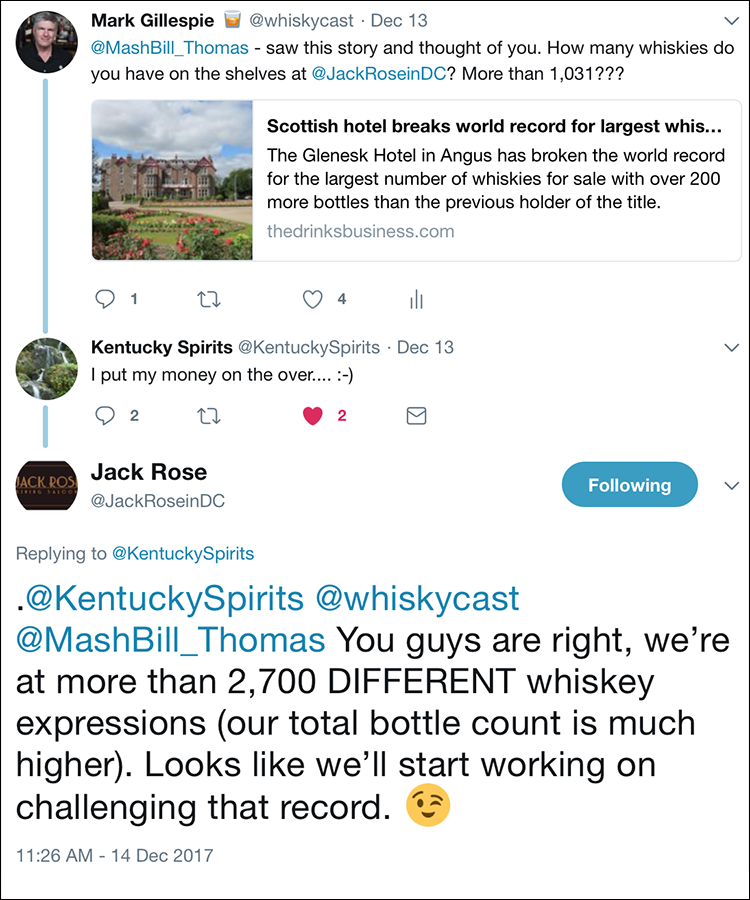 As of publication, the Jack Rose web site currently lists 2,687 different whiskies available. However, that number may well be dwarfed by the inventory at the Artisan Restaurant in Wishaw, Scotland, where owner Derek Mather started receiving comments on his Facebook page as news of the Glenesk Hotel’s record spread. According to Mather, the Artisan has 3,450 different bottles on hand as of today, of which 2,240 are currently open.

“Quite a few people know how much whisky we’ve got in the restaurant, which is obviously always growing – there’s always deliveries coming in,” Mather said in a telephone interview for this week’s WhiskyCast. “I knew about the old Guinness book record of being 800 bottles, but I’ve never done anything about it.” 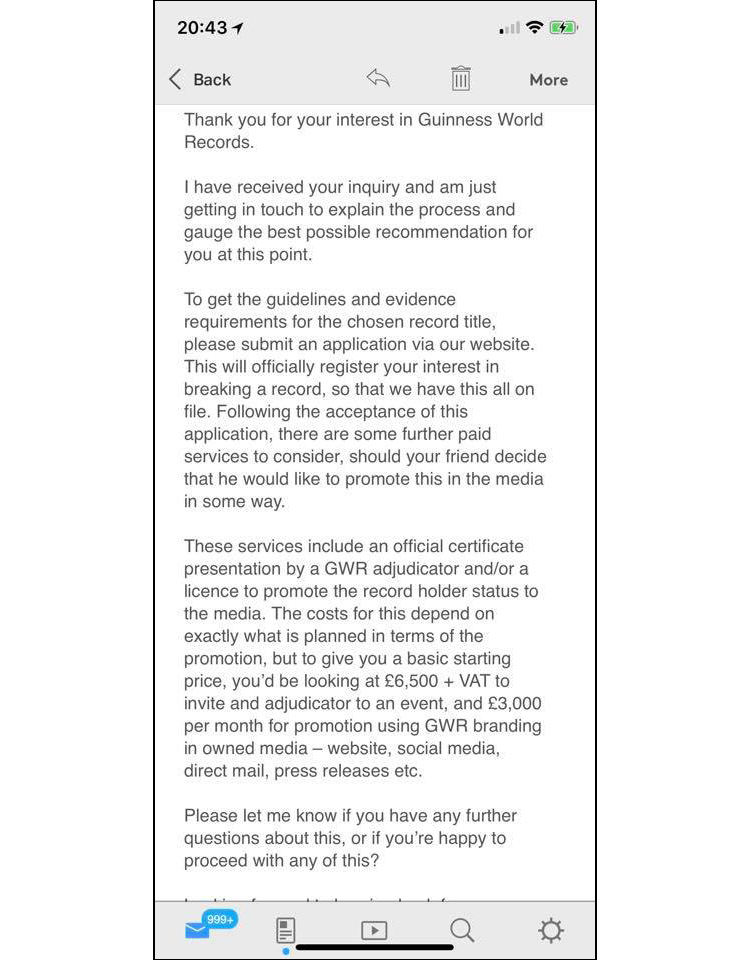 Mather told WhiskyCast one of his customers contacted Guinness World Records with questions about the new record, and received a response outlining how to submit an application to break that record, which he shared with Mather. However, Mather will not be attempting to challenge the Glenesk Hotel’s record for a simple reason: money.

“There’s lots of costs involved, apparently, one being £6,500 GBP plus VAT ($8,658 USD) for an adjudicator to come out and count the whisky,” he said with a laugh. In addition, Guinness World Records charges an additional monthly licensing fee of £3,000 GBP ($3,996 USD) in order for a record holder to be able to use the Guinness World Record logo and other trademarks  to promote its record in advertising and other forms of media.

“That’s a lot of whisky to buy for the bar, so I’d rather buy whisky,” Mather laughed. “I’d rather invest that money in buying whisky and letting my customers drink whisky that they probably wouldn’t be able to get their hands on otherwise. A lot of people who frequent the restaurant come to me because they might have a bottle in their collection, but I’ll probably have it open … so rather than them open it, they’ll come and try it here, and then if they’re happy with it, most of them that I know of have opened their bottles.” 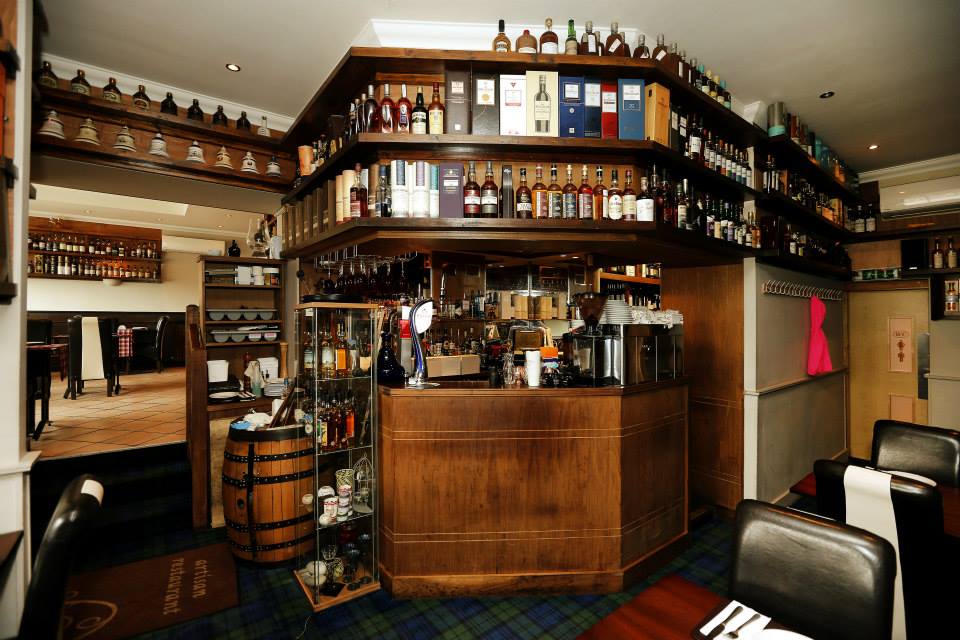 WhiskyCast contacted the Glenesk Hotel and spoke briefly with operations manager Samuel Allen, who was quoted in The Drinks Business article. However, Allen cited company policy and referred us to the hotel’s public relations firm, Granite PR, to arrange an interview. Granite’s Graeme Forbes declined to make anyone from the hotel available for an interview, saying it had closed for the festive season and would not reopen until early January, but noted in an email that the hotel plans a celebration of the world record shortly after the holidays with “appropriate PR and media activity around this date.” For that reason, we do not know whether the hotel’s owners paid the £6,500 fee for an adjudicator to visit the bar and certify the inventory, or whether Robert Fleming of Angus Dundee served in that role – either paid or as a volunteer. However, the hotel’s web site currently displays the Guinness World Records logo on its home page, which would indicate that the owners have paid the required licensing fee.

However, Guinness World Records spokesperson Kristen Ott responded to a WhiskyCast inquiry about the costs for submitting a world record with this note via email:

In addition to our standard free record processing, we offer a range of paid for services, including research into appropriate records and on-site record verification from a trained Guinness World Records representative. However, these services are not necessary to complete record processing.

We welcome an application from anyone wishing to attempt this record title.”

In a separate email, Ott indicated that Guinness World Records does not charge record holders a licensing fee to promote a record in its advertising or social media, unless the record holder wants to use the trademarked Guinness World Records logo. In that case, the actual licensing fee would depend on the type of promotion, with, according to Ott: “for example a multi-month TV advertising campaign is much larger than a week long social media campaign.” We have requested a follow-up interview to get more clarification on this subject.

The Guinness Book of Records was first published by Dublin’s Guinness Brewery in 1954, and was owned by Guinness until 2001, when Diageo sold the Guinness World Records unit while licensing the rights to use the Guinness name. It is currently owned by the Canadian-based Jim Pattison Group, but remains based in London.

Editor’s note: This story has been updated with additional information from Guinness World Records.