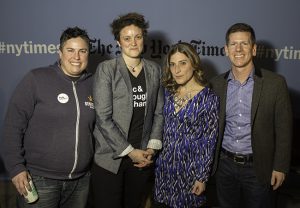 This week, the New York Times marked the anniversary of the end of Prohibition with a special event at one of America’s few women-owned distilleries, Republic Restoratives in Washington, DC. “Women in Whiskey, Sisters in Suds” featured a discussion of the role women play in distilling and brewing – both today and in history. We’ll talk with Republic Restoratives co-founder Rachel Gardner and bring you the discussion on this week’s WhiskyCast In-Depth. In the news, the tentative Brexit deal between Great Britain and the European Union is being welcomed by Ireland’s distillers and brewers on both sides of the border between Northern Ireland and the Republic of Ireland. Brown-Forman’s stock price jumped after a positive quarterly earnings report, and Pernod Ricard plans to start exporting whiskies made by its unit in India. We’ll also look at a new English single malt whisky and compare two rye whiskies with port wine influences in this week’s tasting notes.