March 1, 2020 – The founders of Calgary-based Secret Spirits are in an Idaho jail after being arrested on charges of illegally selling Scotch Whisky to undercover state liquor agents. Jonathan and Cindy Bray were arrested by Idaho State Police last Monday and face felony charges of criminal conspiracy and selling liquor without a license. They are being held in the Kootenai County Jail in Coeur d’Alene on $100,000 bond each, according to the jail’s current list of inmates as of this morning. Both are scheduled to appear in District Court for a hearing this coming Friday (March 6).

According to the Coeur d’Alene/Post Falls Press, the Brays told the agents they were trying to get rid of more than 100 bottles of whisky from a storage unit because of “trade disagreements” that kept them from getting it into Canada. They had the whisky shipped to Idaho, and told the agents it would be easier to sell the whisky there than try to transport it to Calgary. Agents seized more than 100 bottles of Scotch from the storage unit following the arrests. Secret Spirits does not hold the federal licenses required to operate legally as an importer or distributor in the United States, and it is illegal to sell alcoholic beverages in Idaho without the proper state licenses. 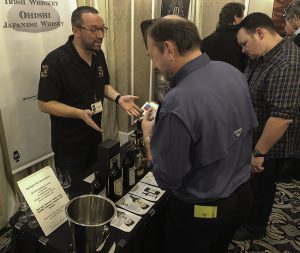 The Brays have been fixtures in Canada’s whisky industry for at least a decade. Prior to founding Secret Spirits, they were partners in Purple Valley Imports, and have been regular exhibitors at many Canadian whisky festivals. Their company has also distributed  whiskey and spirits brands from Ireland and Japan within Canada, according to the Secret Spirits web site.

Secret Spirits is best known for its annual Whisky Advent calendars, which the Brays produced using whisky imported from Scotland. Court records indicate the Brays have shipped 154 boxes of whisky from their Idaho storage unit to U.S. customers since last November, and that they had told the private postal franchise handling their shipments that the packages contained “blown glass from Scotland” instead of whisky. It is illegal to ship alcoholic beverages through the United States Postal Service.

Prosecutors originally asked for bail of $250,000 each and for both suspects to turn over their passports, based on the potential sentence of up to 10 years in prison. While neither of the Brays have criminal records in the U.S., prosecutor Jed Whitaker told the newspaper that the potential penalties are severe enough to make them flight risks. A magistrate set bail at $100,000 each and ordered the Brays to forfeit their passports until the case is resolved.

As previously noted, the Brays remain in custody and have not been available for comment. It is not known whether they have retained legal counsel to speak on their behalf.

Editor’s note: As with all criminal cases in the U.S., defendants are presumed to be innocent until proven guilty at trial. Since the Brays remain in custody, we have not been able to get their side of the story. This story will be updated with additional details as needed. This story was edited to clarify the extent of the Secret Spirits distribution business within Canada.