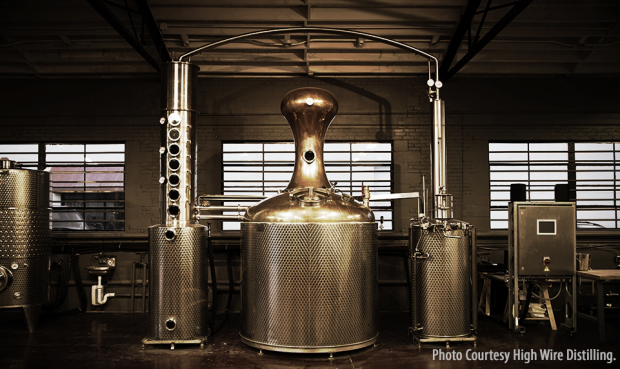 The husband and wife team of Scott Blackwell and Ann Marshall opened High Wire Distilling six years ago in Charleston, South Carolina to make whiskey, gin, vodka, and an Amaro liqueur. Now, they’re turning a corner…literally. They’re investing $3 million to move the distillery into a much larger building a few blocks – and around a corner – from their original site, along with adding a second still just for whiskey, an expanded tasting room, and what they’re happiest about…a real loading dock! We’ll talk with them on WhiskyCast In-Depth.

There’s enough news to fill a second episode this week! After four days, the fire that destroyed a Jim Beam warehouse with 45,000 barrels of bourbon has finally burned itself out, though the environmental damage to the Kentucky River is still being felt. The trade war between the U.S. and Europe could expand to include punitive tariffs on Scotch and Irish whiskies in a dispute over aviation subsidies, while U.S. regulators are moving forward with a proposal to deregulate most bottle sizes for whiskies and other distilled spirits. There’s also a truckload of new whiskies to mention, and we’ll have an unusual head-to-head comparison: a whiskey and the beer it was distilled from.