Waiting for the Eclipse? No Problem for Whiskey Distillers at “Ground Zero” in Kentucky 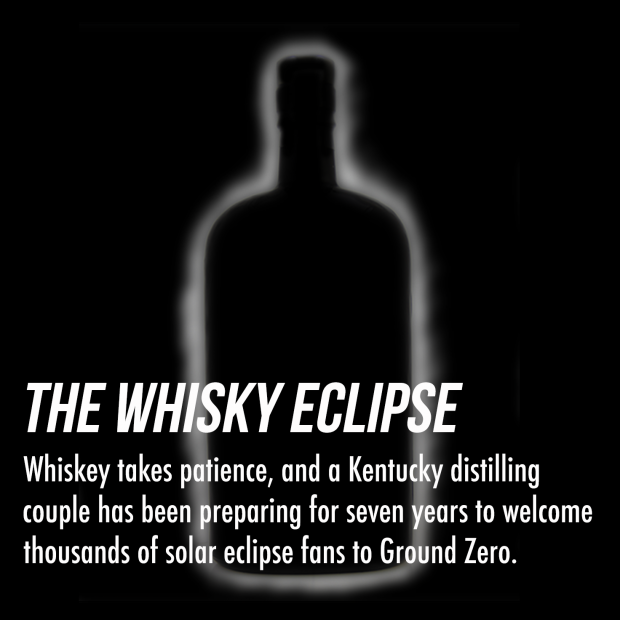 August 19, 2017 – Whiskey can take years to mature, so one of the virtues a good distiller needs is patience. Paul and Merry Beth Tomaszewski have been preparing for Monday’s total solar eclipse for years – not because they’re astronomy buffs, but because they’re expecting friends at their MB Roland Distillery in Pembroke, Kentucky this weekend…a lot of friends. The distillery is located not only in the middle of the path the solar eclipse will take across North America as the Moon passes between Earth and the Sun Monday, but it’s right at what astronomers call the “point of greatest eclipse,” where the moon will block the sun for the longest period of time…around 2 minutes and 40 seconds. In other words, they’re located at Ground Zero for the most ardent eclipse watchers.

The Tomaszewskis started thinking ahead to Eclipse Day almost as soon as they opened their distillery when a college professor from California stopped by for a visit.  “He asked me ‘do you know what going to happen here on August 21, 2017,’ and we’re talking…I’m not lying…six, seven years ago, maybe eight,” Paul Tomaszewski said. After he said he’d heard something about an eclipse, the professor said “I’m gonna be right here.” At that point, the Tomaszewskis knew they had to start planning ahead.

“It’s coming…this isn’t something that you plan for and it happens…it’s happening whether you plan for it or not.”

Their distillery is located a mile north of Interstate 24 near the Kentucky-Tennessee border, and is surrounded by corn fields and narrow two-lane roads likely to be jammed with tourists. The Tomaszewskis started serious planning five years ago in cooperation with Christian County officials in nearby Hopkinsville, which is expecting thousands of visitors as well. The distillery has been designated as one of the county’s several official viewing areas for the eclipse, with an eye aimed at spreading visitor traffic out as much as possible. The fields around the distillery will be filled with campers coming from California, New York, Canada, and other countries – filling weekend campsites that sold out weeks ago at $400 for a 20 foot by 30 foot tent campsite and $600 for larger campsites capable of holding a recreational vehicle.

MB Roland is hosting the two-day Kentucky Bourbon Mashoree festival with 15 other Kentucky distillers this weekend, followed by the eclipse viewing party on Monday with a crowd projected at between five and eight thousand people. Thousands of pairs of safety glasses will be handed out in advance of the eclipse, and Christian County sheriff’s deputies will be directing traffic and providing overnight security for the campground.

The Tomaszewskis have also taken one other factor into account: etiquette. There will be live music throughout the day on Monday, but the bands will shut down as eclipse time nears around 1:20pm local time. However, it’s not the music that has Paul Tomaszewski worried…it’s the cell phones.

“The biggest thing is going to be to get people to make sure their flashes aren’t on and their phones are turned off to some degree…I know that’s going to be a tall order, but we’re going to do our best, because the idea with the eclipse is you cannot take pictures or video that’s going to replicate what you can see with the naked eye,” he said. Guests will receive a pamphlet explaining eclipse etiquette when they arrive at the distillery, noting that any amount of light can ruin the experience for the people around them. Street lights have already been programmed to not come on during the eclipse, and the distillery’s lights will be turned off in advance.

“Enjoy the two and a half minutes…it’s a once in a lifetime opportunity…you’re never gonna see it again.”