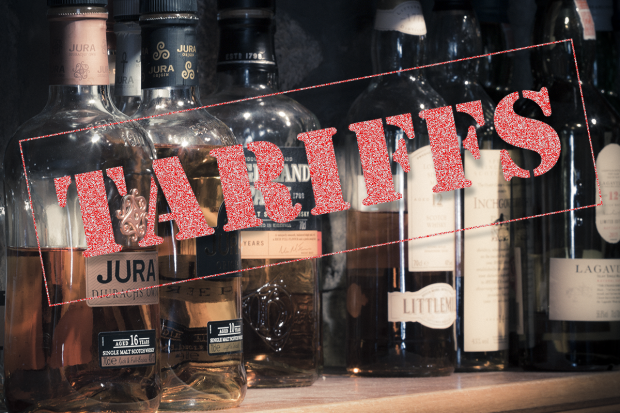 July 2, 2019 – When the European Union imposed punitive tariffs on Bourbon and other American-made whiskies a year ago in the ongoing trade dispute with the Trump Administration, distillers in Scotland and Ireland waited nervously for the other shoe to drop.

It dropped Monday, as the Office of the U.S. Trade Representative (USTR) included Scotch Whisky, Irish Whiskey, and whiskies from all European Union member nations on a new list of $4 billion in European goods that could be hit with new tariffs later this year. The U.S. is the leading export market for both Scotch Whisky and Irish Whiskey, which have had tariff-free status on exports to the United States since 1995. Based on 2018 data, whiskies would account for nearly half of the imports subject to the proposed tariffs.

The proposal comes on top of punitive tariffs announced by the U.S. in April on $21 billion of European imports – including wine, brandy, liqueurs, and cordials – in connection with a long-standing dispute over subsidies for Airbus and Boeing. Both sides have complaints pending at the World Trade Organization accusing each other of illegally subsidizing the aviation giants, and a WTO arbitrator has already ruled that both are violating global trade rules. The arbitrator is expected to rule later this summer on countermeasures the U.S. can legally impose to compensate for the economic impact of those subsidies, while a ruling on the European Union’s case is expected early next year.

The EU’s 2018 25 percent tariff on imports of American whiskies was in response to the Trump Administration’s decision to impose tariffs on imports of European steel and aluminum on national security grounds using a provision of U.S. law, while this dispute has been working its way through the WTO’s resolution process for years.

Scotch Whisky exports to the U.S. set a record in 2018 with a value of $1.3 billion on shipments of 137 million bottles, according to HM Revenue & Customs data compiled by the Scotch Whisky Association, which estimates that its exports account for 12% of all U.S. whisky sales. SWA executives have not been available for interviews, but in a statement provided to WhiskyCast, the association expressed disappointment that Scotch Whisky has been drawn into the dispute.

“The Scotch Whisky industry has consistently opposed the imposition of tariffs, which harms economies on both sides of the Atlantic which depend on trade for their continued prosperity. There is a close relationship between the US whiskies and Scotch Whisky, not least due to the use of bourbon casks for maturation which generates around £70m for the US economy each year. We continue to urge the UK government, the EU and the US government to resolve the Airbus-Boeing subsidies dispute without resorting to tariff retaliations for unrelated sectors.”

Irish Whiskey has been the fastest-growing segment of the global whisky market for the last several years, and the United States is not only the largest export market for Ireland’s distillers, but the largest single market period. According to Bord Bia, Ireland’s national food and drink promotion agency, whiskey exports to the U.S. in 2018 were valued at €620 million ($700 million USD), while sales in the U.S. broke the billion-dollar mark for the first time on sales of nearly 4.7 million 9-liter cases (approximately 56.4 million 750ml bottles).

Irish Whiskey Association spokesmen declined a request for interviews, but said in a statement that the trade body will file its objections with the USTR.

“The Irish Whiskey industry opposes the imposition of tariffs, which harms distillers and businesses both in Ireland and in the US. Any tariffs imposed on Irish Whiskey entering the US market will negatively impact investment and employment in both jurisdictions. We urge both sides to continue to strive to achieve a mutually acceptable solution to this issue and to avoid imposing barriers to trade which will ultimately adversely impact businesses and consumers on both sides of the Atlantic.”

Scotch and Irish whiskeys account for almost all of Europe’s whisky exports to the United States, with small amounts of exports from England, France, the Netherlands, and other countries that collectively add up to fewer than one million cases annually. Many of those whiskies are imported into the U.S. by smaller independent importers, for whom the potential impact of even small tariffs could be significant.

Both Scotch and Irish whisky producers and importers are also represented in the United States by the Distilled Spirits Council, which counts among its members the largest producers and importers of both whisky categories. The group’s 2018 economic data showed a significant impact on American whiskey exports in the second half of the year following the imposition of the European Union tariffs, and the Council issued a statement today citing an 18 percent drop in American whiskey exports to Europe because of the tariffs.

Robert Maron, the Council’s Vice President for International Trade, warned that the USTR’s proposed tariffs could backfire with “unintended consequences,” based on an analysis of the domestic impact from the drinks tariffs proposed by the USTR in April. “A 10 percent tariff on all of those products would result in a loss of about 6,600 jobs, a loss of 15,000 jobs for a 25 percent tariff, and a loss of 45,000 jobs for a 100 percent tariff,” he said in a telephone interview. Those job losses would likely be spread throughout the entire three-tier system made up of importers, regional distributors, and local retailers. While the organization has just started calculating the potential impact from adding Scotch and Irish whiskies to the tariff list, Maron projected those numbers would likely increase.

In addition, the European Union has prepared its own list of more American goods that could be subject to retaliatory tariffs, including American-made rums, vodkas, and wines. “There’s a potential for this to further escalate and impact American spirits exports to the EU even more on top of the 18 percent decline we’ve seen in American whiskey exports to the EU,” Maron said.

The USTR is currently seeking public comments on the impact of the proposed tariffs on American businesses and consumers, and will hold a hearing on the proposal in Washington on August 5. However, the Trump Administration is reserving the right to impose the tariffs immediately if the WTO arbitrator’s ruling comes before the public comment process is complete.

WhiskyCast has requested interviews with the USTR, and this story will be updated with more details as they become available.

Editor’s note: This story has been updated with comments from the Distilled Spirits Council’s Robert Maron and additional information.