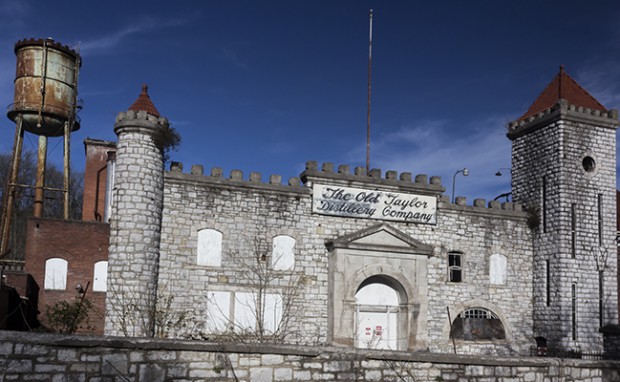 October 30, 2015 – The inevitable lawsuit could have been predicted from the moment that plans were announced last year to restore the historic Old Taylor Distillery near Versailles, Kentucky. On one side – local lawyers Will Arvin and Wesley Murry, who put together the financing for a $6.1 million dollar restoration of the distillery built by Col. E.H. Taylor in 1887 with plans to make whiskey there once again. On the other side – Sazerac, which owns the Buffalo Trace Distillery in Frankfort, acquired the trademark rights to the Old Taylor brand from Beam in 2009, sells its own whiskies under the Col. E.H. Taylor brand, and has a reputation for aggressively defending its trademarks and intellectual property.

Now, Sazerac has filed a lawsuit in federal court accusing Arvin and Murry’s Peristyle LLC of trademark infringement and unfair competition. While the distillery itself is still in the final stages of construction, restoration of the site’s extensive gardens has allowed Peristyle to begin marketing the Old Taylor Distillery as a venue for weddings and other special events. That is the focus of Sazerac’s lawsuit filed in the U.S. District Court in Frankfort, and claims even Peristyle’s use of the name that the property has been known as since 1887 violates Sazerac’s various trademarks for “Old Taylor” and “Col. E.H. Taylor Jr.” The lawsuit also seeks a preemptive ban on Peristyle’s use of the Old Taylor name on whiskies produced once the distillery reopens, though in an April WhiskyCast interview, Peristyle master distiller Marianne Barnes acknowledged that a new brand name was being created for the company’s whiskies. That name has not been announced yet, and Peristyle has not yet created a web site for the distillery.

In the complaint, Sazerac maintains that any use of its trademarks by Peristyle would create consumer confusion and imply that the distillery is affiliated with Sazerac.

“The parties have engaged in settlement negotiations since 2014 in an effort to resolve this dispute. It has been more than a year and a half without resolution, however, and Defendants’ stalling tactics have left Plaintiffs with no choice but to bring a civil action to protect their valuable trademark rights and prevent consumer confusion.”

Sazerac’s complaint is based on the historical sign above the distillery’s main entrance, along with various news articles, a website promoting tours of the site as part of a recent garden show, and even Facebook posts from Marianne Barnes showing photos of the restoration while referring to Col. Taylor. WhiskyCast asked Sazerac CEO Mark Brown in an email whether the site’s new owners would be allowed to refer to the distillery’s history – or even acknowledge that it was built by Col. Taylor – without violating Sazerac’s trademarks. In an emailed response, Brown declined to comment on the lawsuit, citing the company’s policy against discussing pending litigation.

WhiskyCast has asked Peristyle for a response to the Sazerac lawsuit, which was filed on Tuesday. The company has not yet filed its answer to the lawsuit with the court, and generally has a 30-day period of time after the initial filing to do so.

Editor’s note: We are providing a complete copy of the Sazerac lawsuit on our site. In civil cases, court filings only present one party’s side of a dispute with no obligation to present mitigating evidence. Claims in civil court filings are not considered proven facts until argued and ruled on by a judge.