Trade War Expands with Whisky as a Weapon 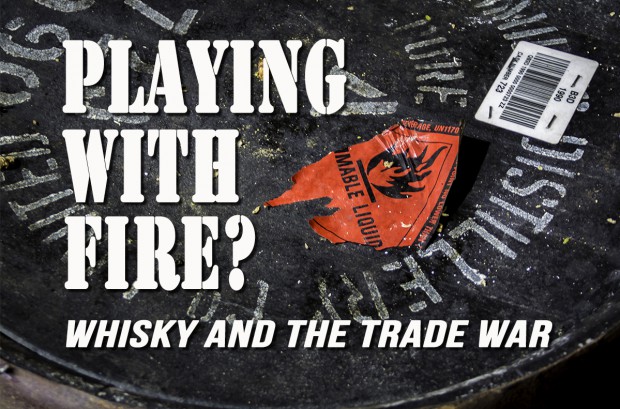 Updated June 5, 2018 – Mexico has now joined the whiskey trade war of 2018, imposing new 25 percent import tariffs on Bourbon imported from the United States in retaliation for the Trump Administration’s new tariffs on imported steel and aluminum. Reuters reports the tariffs were announced in the government’s official gazette, and will take effect immediately along with new tariffs on a wide range of other agricultural products.

Mexico now joins Canada and the European Union in targeting Bourbon with new tariffs of 25 percent, while the EU will impose that tariff against all types of American whiskies. The EU’s tariffs could take effect as early as June 20, while the Canadian tariffs will take effect July 1 following a 15-day consultation period for its citizens to comment on potential changes to the list.

After weeks of posturing by all sides, the United States moved forward Thursday with its steel and aluminum tariffs on imports from the European Union, Canada, and Mexico. Thursday’s announcement in Washington both surprised and enraged leaders in Brussels, Ottawa, and Mexico City, and the tariffs are expected to be a point of contention when U.S. President Donald Trump attends the G-7 Summit this weekend in Quebec.

“The United States now leaves us with no choice but to proceed with a WTO dispute settlement case and with the imposition of additional duties on a number of imports from the United States,” European Commission President Jean-Claude Juncker said in a statement released after the U.S. announcement. The EU also intends to file a case against the U.S. at the World Trade Organization seeking to have the tariffs ruled a violation of international trade regulations.

While the Trump Administration’s sanctions are intended to help the struggling U.S. steel industry, the American whiskey industry stands to pay the price. Bourbon, Tennessee, and other American-made whiskies accounted for 68 percent of U.S. spirits exports during 2017, according to U.S. Commerce Department data compiled by the Distilled Spirits Council. 2017’s American whiskey exports added up to more than a billion dollars for the first time, but a look at the leading spirits export markets explains why American-made whiskies are being targeted for retaliation. 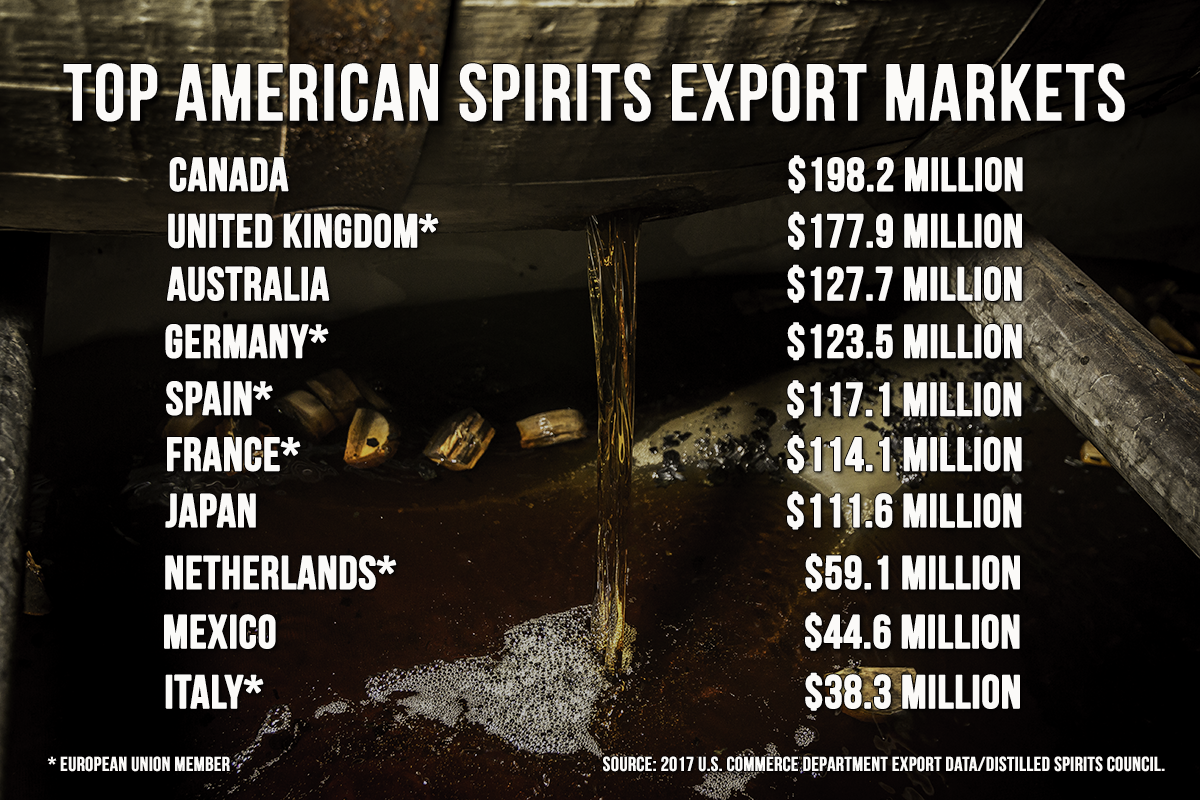 Canada is the largest single export market for U.S. spirits, while six of the top ten countries are EU member nations. Whiskey exports to Canada rose 7.3 percent during the first quarter of this year compared to the same period in 2017, according to Commerce Department export data supplied by the Distilled Spirits Council. According to the trade group, American-made whiskies accounted for 85 percent of 2017’s spirits exports to the 28 European Union member nations, with a value of $667 million. In a prepared statement, Council executives expressed hope for a quick resolution.

“We hope the United States and its trading partners can resolve their differences without subjecting U.S. whiskey exports to retaliatory tariffs.  A trade war will harm consumers, the hospitality sector, small businesses and U.S. farmers that grow the grains used to produce iconic U.S. whiskeys that are enjoyed around the world.”

The retaliatory sanctions were designed to create political pressure on the Trump Administration, with products selected for their links to politically sensitive regions. Kentucky is the largest producer and exporter of Bourbon, and Senate Majority Leader Mitch McConnell addressed the dispute during a speech Friday in Louisville.

“I don’t think anything good will come out of a trade war, and I hope we pull back from the brink here,” he said. “These tariffs will not be good for the economy, and I worry that it will slow, or impede significantly, the progress we’re making economically,” McConnell said in a quote by Louisville Business First.

The state’s distillers have an $8.5 billion annual impact on Kentucky’s economy, and Kentucky Distillers Association president Eric Gregory called on politicians from all sides to reach a common-sense solution. “We remain hopeful that continued negotiations will avoid a costly trade war and protect our allies and partnerships around the world, which will continue to benefit spirits producers and consumers for years to come,” he said in a statement posted on the KDA’s web site.

The other shoe has yet to drop. President Trump has threatened to impose additional tariffs on imported products from Europe, Canada, and Mexico to return fire for their retaliatory tariffs, setting up the potential for even more damage to the global whisky industry. The United States is the largest export market for Canadian Whisky and Irish Whiskey, and is the largest export market for Scotch Whisky by value (France is the largest by volume). Should the Trump Administration choose to impose “like-for-like” tariffs in response to the Canadian and EU tariffs, whisky makers in those countries could face significant price increases in the U.S. market.

Irish Whiskey Association president William Lavelle told WhiskyCast that his group is urging the Irish government and EU officials in Brussels to consider the potential economic impact of its proposed tariffs before imposing them, while defending the need to respond to the US actions.

“Irish Whiskey is the fastest-growing spirits category in the world. We’re selling in 135 markets globally, but the US remains our biggest single market, so anything that threatens free trade with the United States is something we’re wary of, something we’re very cautious about and concerned about, and we are hoping we can avoid slipping into a trade war between the EU and the US on whiskey,” he said. The entire interview with William Lavelle can be heard in Episode 703 of WhiskyCast, available at WhiskyCast.com.

Editor’s note: This story has been updated with new details on Mexico’s tariffs and additional information.