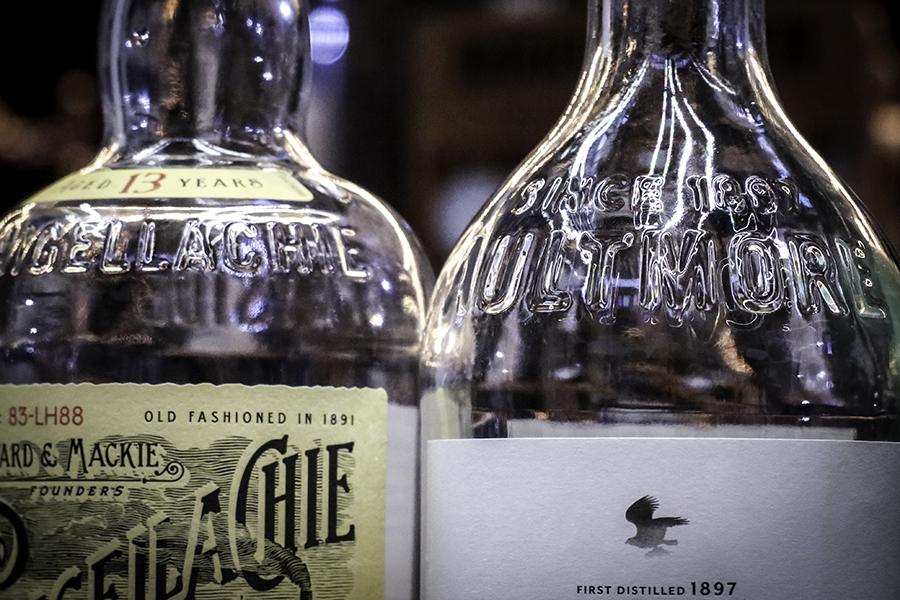 October 30, 2017 – Single Malt Scotch Whiskies are one of the few bright spots in the latest report on Scotland’s whisky exports from the Scotch Whisky Association. The trade group’s analysis of export data from HM Revenue & Customs for the first half of 2017 shows a 7 percent increase in exports of Single Malts during the period, with an estimated value of £479 million ($631.2 million USD). Single Malts now account for more than 25 percent of the value of all Scotch Whisky exports – an all-time high.

Overall Scotch Whisky exports increased in value to £1.8 billion ($2.37 billion USD), up 3.4 percent from a year ago. While that would appear to be a positive gain, a closer look at the data indicates reasons for concern among industry leaders.

“It’s quite a mixed picture,” said Rosemary Gallagher of the SWA. “Things are looking very positive in terms of value – some large markets are up in value, such as the USA, China, and Japan, but there were some markets which didn’t perform quite so well in part to political and economic headwinds.” France, the number one market in export volume, fell in both areas with a 6.8 percent decrease in the number of bottles shipped and a 0.2 percent decrease in the value of those bottles. Overall, the volume of Scotch Whisky exports fell by two percent during the first half of the year, despite the Brexit-induced plunge in the British pound’s value against other world currencies that made Scotch Whisky more attractive on the export market.

While part of the change can be attributed to consumers switching to higher-end Blended Scotch and Single Malts, the SWA’s Gallagher expressed the industry’s growing concern over the decline in volume. “We’re looking now to address that fall in volume to create some more growth there as well,” she said in a telephone interview. The association has been arguing for a reduction in taxes on spirits when Chancellor Philip Hammond releases the British government’s autumn budget next month. Hammond’s spring budget imposed a 3.9 percent increase in spirits taxes, and UK consumers responded by buying a million fewer bottles of Scotch Whisky during the first half of the year.

“That now sees Scotch Whisky taxed at 80 percent – that’s 8-0 percent per bottle in the UK market,” Gallagher said. “That very high level of tax is slowing growth in the UK…it’s an issue we’d like to address with an excise duty cut in the budget next month.” The SWA argues that whisky producers need a strong domestic market to help justify additional investment that would benefit both domestic and export sales.

The United States posted gains in both volume and value, with a 10.5 percent increase in volume to 58.7 million bottles of Scotch Whisky and an 8.6 percent gain in value to £387.9 million ($511.8 million USD), remaining the world leader in that category. Despite the drop in volume, France remains the overwhelming leader in exports by volume with 85.9 million bottles shipped during the first half of the year. Spain’s ongoing economic problems led to declines in both volume and value for one of Scotch Whisky’s consistent “top ten” export markets, while Brazil, South Africa, and India also posted declines in both categories. 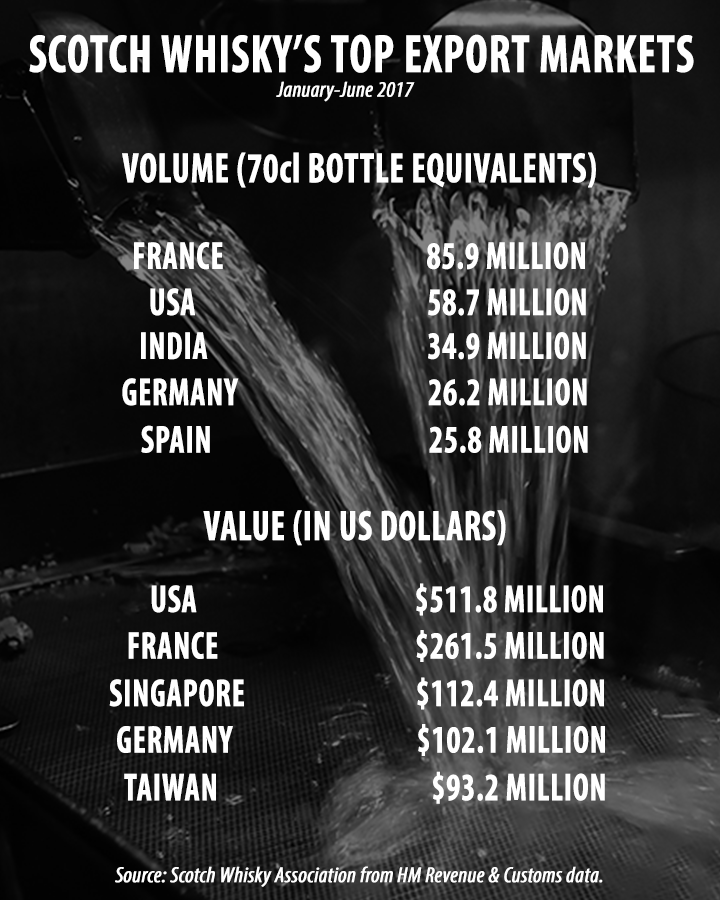 In looking at the countries with significant exports, it is necessary to consider whether those countries have a large domestic market for Scotch Whisky or serve as a trans-shipment point, since Customs data generally tracks only the initial export country. For instance, Singapore serves as a hub for exports to the Asia-Pacific region, and reported increases in both volume (+5.6%) and value (+12.9%). The United Arab Emirates, which imposes strict limits on domestic alcohol consumption but also serves as a key shipping hub, showed a significant decline in Scotch Whisky exports with a 22.7 percent decrease in volume and a 17.4 percent decrease in value.

One surprising statistic that jumps out from the data. Latvia imported 11.9 million bottles (+78.8%) of Scotch Whisky during the first half of 2017, enough to provide each one of the country’s 1.96 million men, women, and children with six bottles of Scotch. Presumably, the Latvian government has not implemented a “whisky welfare” scheme, and it is likely that almost all of that whisky made its way to Russia by way of Latvia. For the record, Russia does not show up on the SWA’s ranking of the top 20 countries by export volume or value,  largely because of trade sanctions imposed by the European Union and other Western countries over Russia’s intervention in Ukraine.