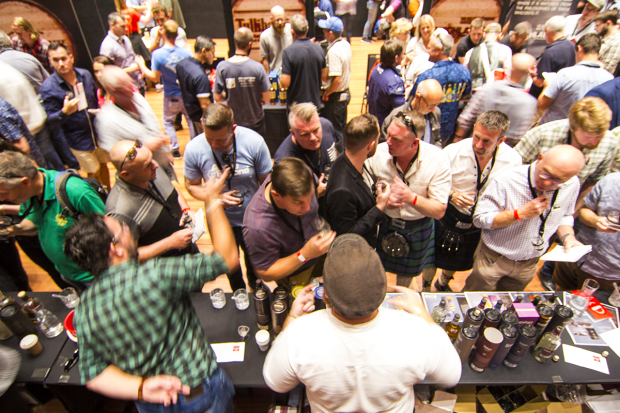 Updated August 7, 2020 – While epidemiologists have warned of a “second wave” of Covid-19 outbreaks in many regions as the flu season begins in the Northern Hemisphere, the current rise in documented infections has organizers of whisky events scheduled for the second half of the year already feeling queasy. That’s led to the postponement or cancellation this week of several events, including major events in London and the “Bourbon Capital of the World,” Bardstown, Kentucky.

The Kentucky Bourbon Festival’s board of directors announced Friday that this year’s festival on the grounds of Spalding Hall in Bardstown will be replaced with a series of virtual events to be available online the weekend of October 15-18. “We’ve got the master distillers from the various partner distilleries that were going to be here in person speaking to maybe 50 people or 100 people depending on the class…now we’ve got an opportunity to showcase that same content and those speakers to thousands of people when we do it virtually,” festival president Randy Prasse told WhiskyCast in a phone interview.

Prasse acknowledged the uncertainty of holding a large public event during the Covid-19 pandemic, especially from those partner distilleries. “The bigger the distilleries, the more apprehensive they were about where we were going to be and where they were going to be able to be, accepting the reality that there were some (corporate) mandates that no one was going to be doing anything live until the end of 2020 regardless of what the week-by-week case numbers were.”

Resistance from whisky brands also played a critical role in the cancellation of The Whisky Show in London scheduled for the first weekend in October. Dawn Davies of The Whisky Exchange is responsible for planning the annual event, and was prepared to go ahead with a hybrid of virtual events and in-person events at Old Billingsgate – until brands started pulling out of the show in the last few days.

“Everything was fine, and then we literally had five brands pull out on us literally in the same heartbeat as we were talking about how amazing the show was going to be,” Davies said from her office in London. “We had a couple of others that were wavering, and these were brands that had confirmed and committed and were going ahead…we just looked at the numbers and were like…I don’t want to deliver a show that isn’t absolutely awesome for the customers.” Davies also cited recent spikes in Covid-19 cases that have caused new lockdowns in Aberdeen, Manchester, and other parts of the UK, along with rapidly changing government guidance on attendance limits at events. Plans are being redrafted to make as many of the show’s events virtual, with tasting packs that will be available to order in the coming weeks through The Whisky Exchange.

The Whisky Lounge confirmed Friday that its London Whisky & Spirits Weekender event scheduled for September 4-6 at the Kia Oval will be postponed until next May. Autumn events in Liverpool, Manchester, and York are also in jeopardy, according to The Whisky Lounge co-founder Eddie Ludlow, with a final decision likely later this month.

“The challenge in the UK is that we’re seeing peaks and spikes in various areas of the country, not necessarily on a daily basis, but it certainly seems to be happening with increasing regularity…which is, I suppose inevitable given that there are a few people who don’t seem to be taking it seriously,” Ludlow said in a telephone interview. That skepticism, combined with the convivial nature of whisky festivals, only raises the potential for these events to become “super-spreaders” for Covid-19.

“This is the kind of thing where you wake up in sweats and can’t go back to sleep kind of story,” Whiskey and Barrel Nite promoter Dave Sweet said of the potential for whisky festivals to become so-called “super-spreader” events. Sweet and his colleagues announced Thursday that they’re pulling the plug on their New York City event scheduled for August 20 at the Hotel Pennsylvania in midtown Manhattan. New York City is the one remaining area of the state yet to allow restaurants and bars to resume indoor service, and Sweet cited the lack of approval by state and local officials for events to resume.

“Our venue has held back on even opening, let alone doing any large events,” Sweet said in a telephone interview as individual email alerts to ticket holders and exhibitors were going out. “We just felt it was better to put the event off and give everyone in New York that is trying to do anything some space until March, which we’re very hopeful and confident that we’re going to get back to some semblance of normal,” he said.

Ticket holders will be offered the option of a credit for the March 2021 event or any other Whiskey and Barrel Nite event in 2020 or 2021. In addition, they will be given free admission to the Whiskey and Barrel Nite event in Paramus, New Jersey scheduled for September 16. That event is being held at a restaurant and wedding venue with significant outdoor space, and Sweet plans to utilize that space to comply with New Jersey’s current public restrictions. 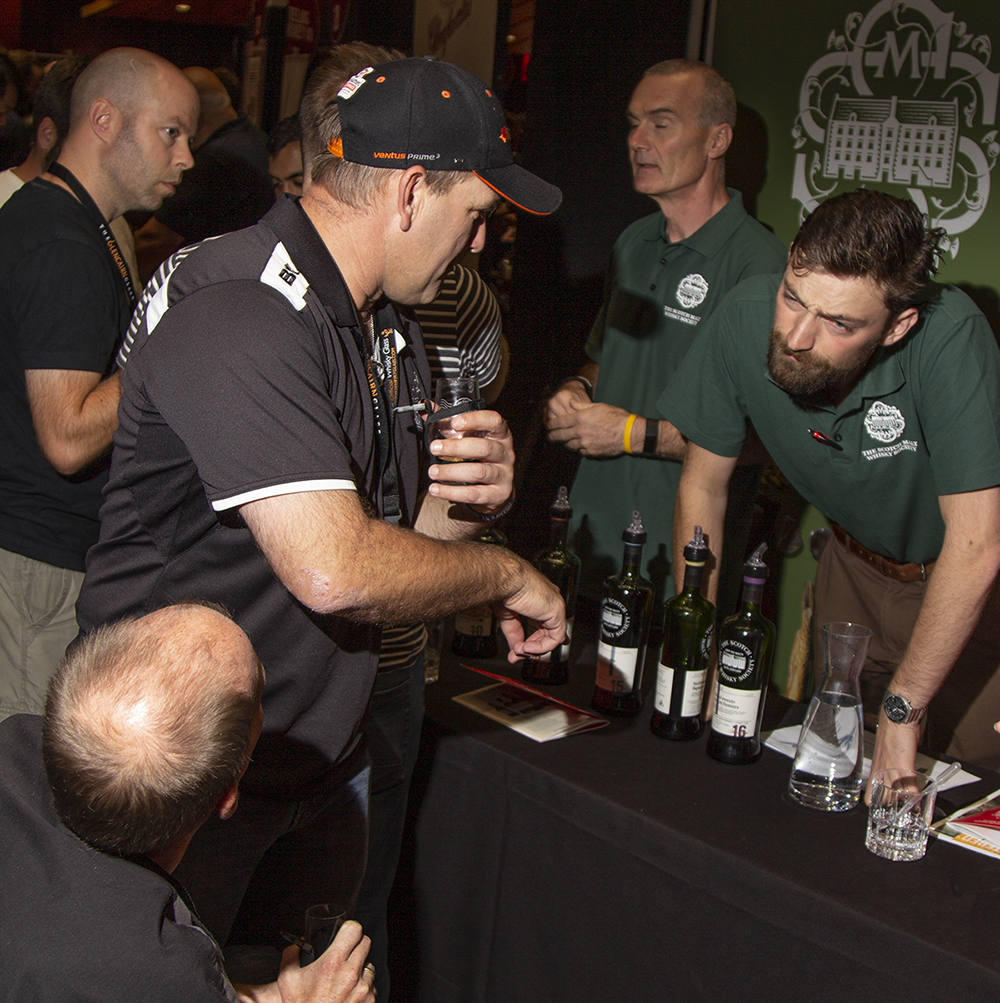 Social distancing is difficult to maintain at whisky festivals, such as March’s DramFest 2020 in Christchurch, New Zealand, which was held before the government imposed strict public health restrictions during the early stages of the Covid-19 global pandemic. File photo ©2020, Mark Gillespie/CaskStrength Media.

In addition, the promoters of Whisky Live events in Australia have now cancelled their event September 4-5 in Adelaide, with their web site now showing plans for a 2021 event next June. Their Canberra event scheduled for September 25-26 remains on the calendar, though.

Dublin’s Celtic Whiskey Shop kicked off the latest wave of cancellations with the announcement Monday that November’s Whiskey Live Dublin festival has been cancelled. That event was to have been held at the city’s convention centre to allow enough space for social distancing. However, the Irish government Tuesday announced another three-week delay in moving to the next phase of reopening the economy, with pubs and hotel bars to remain closed and a limit of no more than 50 people allowed at indoor events.

“There’s a kind of increasing concern around wintertime if there is a second or third wave, where we might be able to do things to plan for the event and go ahead with the event and have to cancel it at a later stage, so we decided it was better for all parties – distilleries, consumers, and ourselves organizing the event to cancel it now and put a stronger focus on 2021,” Celtic Whiskey Shop spokeswoman Julie Christie said.

“We just weren’t really able to see how we would be able to accommodate at least 500 people per session, all drinking whiskey and then trying to maintain social distance and all of that…we just thought it was going to be a really difficult task to undertake,” she said.

With many major whisky makers slashing marketing budgets in the wake of lost sales due to pandemic-related economic issues, Christie acknowledged concern on the part of whiskey brands over the risks of exhibiting at large-scale public events as one of the reasons for the decision. “Regardless of their size, Whiskey Live is a huge event for them and they invest a lot of time and money in updating their stands…it’s where they would release a lot of their new whiskies in the run-up to Christmas time, so committing to something like that at this stage and then potentially having it cancelled at a later date would probably have cost more money for both us and the brands.”

In addition, the organizers of the Spirit of Toronto Festival have now cancelled their plans for the scheduled October 15 live event at Roy Thomson Hall, and will replace it with a series of virtual tastings from October 2-31. That event is scheduled to return next May. Organizers of the Stockholm Beer & Whisky Festival are still waiting for Swedish government guidance on how many people will be allowed to attend their event, which runs over the last weekend of September and the first weekend of October. Several contingency plans have been prepared, depending on what the government decides to allow.

Sweet has also cancelled Whiskey and Barrel Days in Pleasanton, California. That event was originally scheduled for Labor Day Weekend as part of the annual Highland Games at the Alameda County Fairgrounds, which has been cancelled. He remains hopeful about Whiskey and Barrel Nite events later this autumn in Chicago and Los Angeles, which remain on the calendar for now pending guidance from local and state officials. In Los Angeles, county officials responsible for issuing event permits have not been given permission to start that process yet, which has also now affected the LA Scotch Club’s annual “Peatin’ Meetin’ XII” event previously scheduled for August 22. Club spokesman Andy Smith shared an email sent Saturday to ticket holders with WhiskyCast rescheduling the event tentatively for September 26 if permits can be obtained in time.

Sweet’s organization took over management of the Whiskey Obsession Festival in Sarasota, Florida this year, and after moving it to the Armature Works in Tampa, has now seen that event postponed twice. The current plan is to hold it on November 4, given that Florida is allowing events with up to 200 people. “We’re hoping that the spikes and everything by November will begin to calm down a little bit and we’ll be allowed to branch out a little bit,” he said. “There’s a large outdoor space as part of our venue and we will tent it and expand things or go entirely outside. Sweet is working with the venue’s management to use open-sided tents that would allow for more ventilation, combined with the use of large fans.

Sweet maintains that his team can organize a safe event with masks and hand sanitizer, along with changes in food options, switching to bottled water for attendees instead of common water dispensers, and as conflicts over masks become more common – extra security on-site. “We will help to remind people gently and politely,” he said. “This is the other reason why we really promote the use of quarter-ounce pour spouts. It’s my goal for a zero-intoxication show…we’re not always able to achieve that, but we try and we come pretty close. If somebody is being insensitive, or unruly, or does not want to adhere to common-sense rules and protocols, then we will ask them to leave,” he said.

Whisky Advocate, which earlier this year rescheduled its WhiskyFest event in Chicago and “Big Smoke Meets WhiskyFest” event in Hollywood, Florida until this autumn, now faces decisions on four events scheduled between October 31 and December 11, including WhiskyFests in New York and San Francisco. A spokeswoman for Whisky Advocate publisher M. Shanken Communications told WhiskyCast in an email that “we are closely monitoring the situation in each city and as we get closer to the dates, we will make final scheduling decisions. In the interest of public health and safety, we will take all proper precautions into high consideration when making these decisions.”

Editor’s note: This story was updated Saturday, August 8 with new information on the postponement of the LA Scotch Club’s “Peatin’ Meetin'” event.