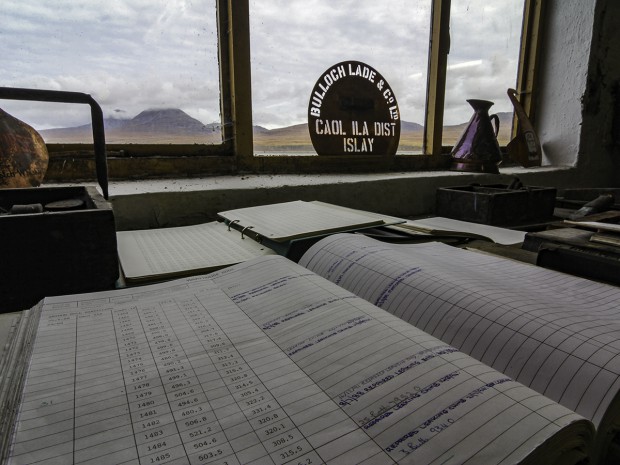 March 16, 2020 – With Scottish officials issuing new guidance on the coronavirus crisis recommending that large gatherings be avoided, more distillers are closing their doors to the public for tours and the fate of this spring’s major whisky festivals is very much in jeopardy.

Directors of the Spirit of Speyside Festival have scheduled an emergency meeting Tuesday to discuss their options in light of First Minister Nicola Sturgeon’s call today to stop all “non-essential social contact” for now. Thousands of tickets have already been sold for the festival’s 700-plus events, with visitors expected in the Speyside from around the world when the festival begins April 30. Islay Festival of Malt & Music directors are also meeting Tuesday evening to discuss their options for Fèis Ìle, which is scheduled to begin May 22. Both groups have advised that announcements will be made on their respective web sites and social media channels once decisions are made. In addition, Whisky Live London promoter Paragraph Publishing has now postponed that event until later this year, with a new date to be announced later.

Sturgeon’s call for Scots to avoid public transit and social contact came a day after her government called for a voluntary end to large public gatherings until further notice. The Scottish Government does not currently have the legal authority to order a mandatory ban, but suggested that it could seek that authority. The move is not directly intended to prevent the spread of the COVID-19 coronavirus, but to provide relief for first responders to allow them to prioritize care for those infected with the virus.

The Islay event presents unique challenges for public health officials in that the island’s population swells from its usual 3,000 to around 9,000 people during the week, placing severe stress on Islay’s infrastructure in normal years. With limited public health facilities on Islay, the ability to deal with a coronavirus outbreak during the festival would be minimal at best.

After a meeting of the island’s distillers Monday evening, all nine of Islay’s distilleries have now closed their visitors centers. Ardbeg and Bunnahabhain had been screening visitors from known coronavirus hot spots for symptoms, but joined their colleagues in closing Tuesday along with Bruichladdich and Kilchoman. Bunnahabhain owner Distell announced Tuesday morning that it will also close its Tobermory and Deanston distilleries to visitors until at least April 3.

Diageo has closed the visitors centers at all 12 distilleries in Scotland that operate tours and visitors centers until at least April 3. In a statement, Diageo executives said “the health and well-being of our employees, visitors and on-site partners is our highest priority.” The decision includes some of Scotland’s most popular distilleries for visitors, including Lagavulin and Caol Its on Islay, Dalwhinnie in the Highlands, Cardhu and Cragganmore in Speyside, and Glenkinchie in the Lowlands. Those holding tickets for tours scheduled between now and April 3 will be able to get refunds or reschedule after tours resume.

Monday, Edrington closed the gates to its landmark visitor destination at The Macallan in Speyside, less than two years after the £150 million GBP complex opened to the public. Highland Park Distillery on Orkney has  also closed its distillery shop and tours, though the Highland Park shop in downtown Kirkwall will remain open for now. Edrington officials pledged to keep paying tour guides and shop workers during the shutdown, saying in a statement that “in addition to safeguarding our visitor experience employees and guests, the decision to close will also protect the operations staff, who continue to work as normal within our distilleries. We would like to thank all our people for their patience and professionalism during this unprecedented time.”

Glenmorangie Distillery in the Highlands remains open for now, but is screening visitors from known coronavirus hot spots for possible exposure. While its visitor center will remain open, Glen Moray Distillery in Elgin ended tours Monday with a notice on social media. 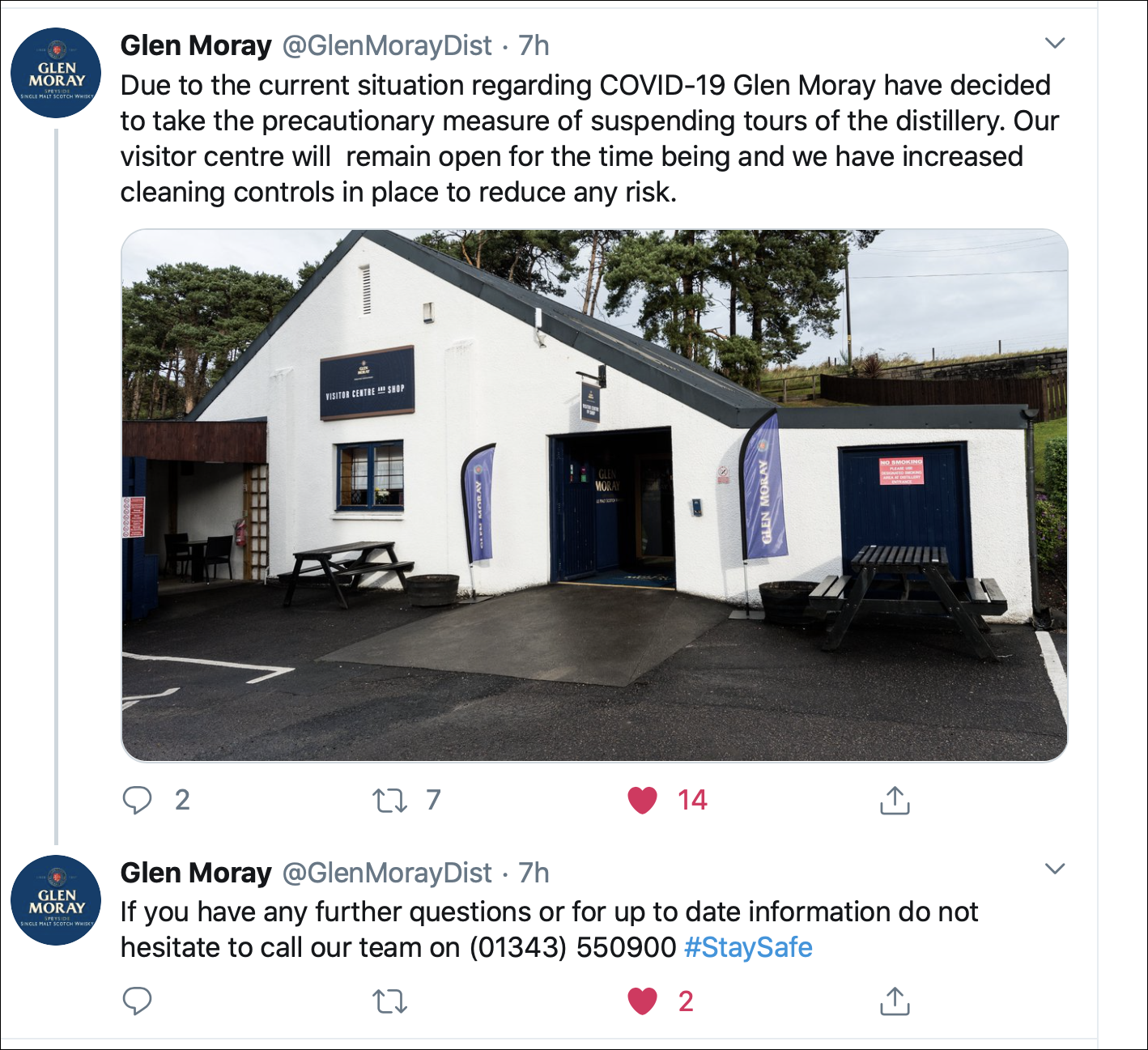 Tweets from Glen Moray Distillery announcing the suspension of tours because of the coronavirus pandemic. Image courtesy Twitter.

Edradour Distillery had only been offering limited tours during the winter, with plans to expand that in April for the tourist season. However, the distillery has now decided it will close to the public completely through the end of April. Ben Nevis Distillery has also announced that it will close down tours and its gift shop until further notice.

In the United States, Sazerac has now locked down the Buffalo Trace and Barton 1792 distilleries in Kentucky until further notice. In addition, events at Buffalo Trace scheduled through early April are being cancelled, including the Easter at The Trace celebration scheduled for April 5. The final event in the distillery’s Legendary Craftsmen Dinner Series scheduled for March 27 has been rescheduled for August 27. The Sazerac House in New Orleans, Louisiana and the A. Smith Bowman Distillery in Virginia are also closed until further notice as well.

Smaller U.S. distilleries are also now closing their tasting rooms and gift shops in line with state government emergency orders. That list includes Catoctin Creek in Virginia, which will keep its on-site shop open for bottle sales only and is also providing free sanitizing alcohol to consumers who bring their own bottle to the distillery. Co-founder Scott Harris told WhiskyCast in an email that the alcohol is not intended for use as a hand sanitizer, but can be used to disinfect surfaces when commercial products are not available. The distillery is also cancelling all events through the end of March, with no decision yet on April events.

Constellation Brands-owned High West Distillery has closed both its original site in Park City, Utah and its main distillery in Wanship, Utah to the public until further notice. Tuthilltown Spirits in Gardiner, New York is also closed as part of the worldwide closing of William Grant & Sons distillery experiences.

Sagamore Spirit Distillery in Baltimore, Maryland is one of the few distilleries to shut down production as well as visitor center operations. The distillery announced on its web site that the entire facility will be closed until at least March 27, and guests with pre-booked tours will be contacted to arrange for refunds or a rescheduled visit.

The U.S. chapter of the Scotch Malt Whisky Society has now postponed all of its tasting events nationwide through the end of April. The organization’s web site does not specify whether refunds will be available or when the postponed events will be rescheduled. A spokesman for the Society headquarters in Scotland has advised  WhiskyCast that many of its tasting events in Europe have also been cancelled in line with local government mandates. For now, the SMWS venues in Edinburgh, Glasgow, and London remain open and tasting events will continue with special hygiene measures in place.

Editor’s note: This story was updated with the closing of Distell’s Bunnahabhain, Tobermory, and Deanston distilleries to visitors Tuesday morning, along with additional information on the Scotch Malt Whisky Society.