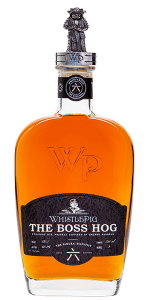 The nose is aromatic and warm with a strong note of maple syrup and touches of bacon, honey, and baking spices. The taste is intensely spicy with clove and cinnamon balanced by charred oak, vanilla, and hints of pipe tobacco. The finish is long and complex with charred oak, lingering spices, vanilla, and a hint of maple syrup. Excellent balance and complexity, and the late Dave Pickerell would be proud of this Boss Hog! (December, 2019)