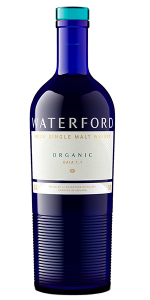 This is the debut release in Waterford’s Arcadian Series, and billed as Ireland’s “first organic whisky.” Unlike the Waterford Single Farm Origin whiskies, it’s made using organically-grown barley from several Irish farms. The nose is aromatic and very malty with touches of figs, dates, plums, and hints of honey, vanilla, and butterscotch. The flavor is intense with a malty touch of barley sugar along with cinnamon, white pepper, and cardamom spices complemented nicely by dark fruits, honey, and butterscotch. Adding water opens up touches of citrus fruits and dried flowers. The finish is very long, aromatic, and thick with lingering spices, butterscotch, toasted oak and a touch of grilled fruits. (August, 2020)