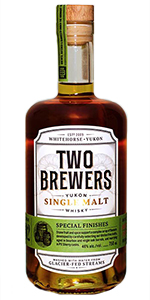 The folks at Yukon Spirits in Whitehorse, Yukon have been brewing beer for far longer than they’ve been making whisky, so it makes sense that they’d experiment with a hopped whisky as part of their “Innovative” series of single malts. The nose has notes of honey, citrus, and hints of cilantro (coriander) and vanilla. The taste has good spices, a lemony hoppiness, and touches of honey, vanilla, and brown sugar underneath. The finish is medium-length, slightly tart, and aromatic. (April, 2018)