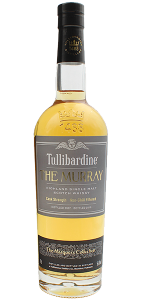 This is the sixth release in Tullibardine’s Marquess Collection honoring those who have held the title of Marquess of Tullibardine over the centuries, including Sir William Murray – a contemporary of Bonnie Prince Charlie and a figure in the Jacobite Rebellion of 1715. (What, you thought they named it after some whisky writer?)

This release was distilled in 2007 and matured until 2019 in ex-Bourbon barrels before being bottled at cask strength. The nose has touches of lemon zest, coconut cream pie, a touch of linseed oil, and hints of vanilla and malt. The taste is fruity and tart with a good creamy texture and notes of barley sugar, shortbread cookies, and lemon zest along with hints of coconut and grilled pineapple. The finish is long and smooth with a lingering citrusy tartness, vanilla, and a hint of charred oak. (January, 2020)