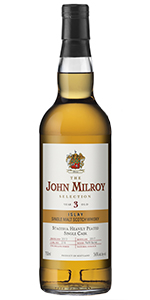 Yes, it’s three years old. Yes, it comes from an undisclosed Islay distillery (Bunnahabhain) that’s not known for heavily peated single malts. This whisky will change your opinion of said undisclosed distillery, though. The nose has peat smoke, iodine, a hint of heather, and not much else. The taste has intense peat and iodine flavors, along with black pepper and dried chili peppers. The spices fade quickly, leaving behind the peat smoke and iodine with a medicinal touch. The finish is medium-length and smoky. Water tames this beast a bit, but think of it as a modern-day example of what young Islay malts might have tasted like decades ago. (May, 2018)