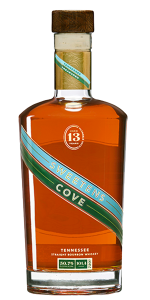 These notes are for Batch #3 out of the original five batches blended by Marianne Eaves from 100 barrels of 13-year-old whiskey. While the Sweetens Cove team is not disclosing the distillery that made that whiskey, we have been able to figure out through reliable sources that it was distilled at Dickel/Cascade Hollow by Diageo. The barrels were later moved to a rickhouse in Kentucky before they were returned to Tennessee and sold to Sweetens Cove. Since Tennessee’s state law requires a “Tennessee Whiskey” to be 100% matured in-state, these batches have been labeled as “Tennessee Straight Bourbon” to comply with state law.

A complicated explanation, yes…but the whiskey itself justifies spending the time to explain the back story. The nose has subtle hints of peppercorns, caramel, leather, vanilla extract, and dried leaves. The taste is chewy and thick with touches of black pepper and allspice balanced nicely by caramel, vanilla, and honey notes with an aromatic touch of garden herbs in the background. The finish is long and sweet with a nice touch of oak. Excellent! (November, 2020)