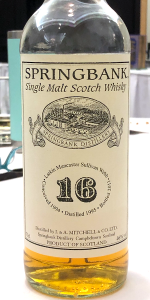 This bottling was released in 2011 after originally being distilled in 1995, and was sold as a single cask release to a private group. The nose has hints of brine and peat, along with smoked salmon, honey, and dried flowers. The taste is rich with hints of brine, a peatiness that develops slowly, and touches of honey, oak, and dried flowers. The finish is long a with a lingering peatiness. (November, 2019)