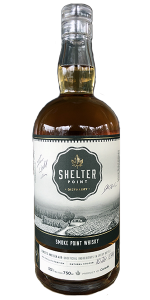 This is the first peat-influenced whisky from Shelter Point Distillery on Vancouver Island. Smoke Point is a single grain made from both malted and unmalted barley, and was finished for 8 months in casks previously used by an Islay distillery (that rhymes with “ma-broyg”). The nose has notes of smoked maple, bacon, dark honey, muted spices, and a soft oakiness. The taste starts off thick and malty, followed by a spicy burst of chili powder and cinnamon spices that fade slowly to reveal hints of maple, honey, and brown sugar. The long finish has slowly fading spices balanced by a subtle sweetness. Excellent! (January, 2020)