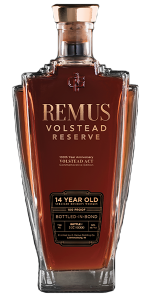 This Bourbon bearing the name of “King of the Bootleggers” George Remus was released in 2019 to celebrate the 100th anniversary of the Volstead Act, the law that implemented the 18th Amendment and Prohibition in 1919. It’s a 14-year-old Bottled in Bond Bourbon from MGP, which owns the George Remus brand. The nose has notes of oak tannins, charred wood, leather, tobacco, molasses, and brown sugar. The taste has a good balance of wood influence and spices, with cinnamon and black pepper complemented nicely by tobacco, leather, cocoa, and a touch of molasses in the background. The finish is long and woody with lingering spices and a hint of sweetness. (October, 2019)