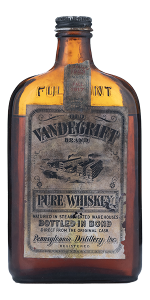 This whiskey was distilled at the Hammond distillery in Northern Indiana in 1917, shortly before Prohibition would force that distillery to close for good. It was bottled in 1934 after the end of Prohibition by the Pennsylvania Distillery, Inc. as a bottled in bond “pure” whiskey. 87 years later, with a collection of rare American whiskies going on the block at Whisky Auctioneer, I had the chance to taste this rare pre-Prohibition 17-year-old whiskey. As one might expect, the nose has plenty of oaky character, but also has a lot of sweetness with touches of butterscotch, brown sugar, and a hint of caramel. The taste is spicy with black pepper and chili powder notes complemented by oak tannins and hints of caramel, red apples, and brown sugar. The finish is long and spicy. Even after 87 years in a bottle, this whiskey still holds up well in comparison to today’s modern whiskies. (August, 2021)