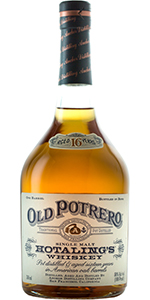 This 16-year-old single malt Rye whiskey was released in late 2016 to mark the 20th anniversary of Anchor Distilling’s first release of Old Potrero, and is one of the few whiskies made with 100% malted rye. It was matured in American Oak barrels that had previously been used once before, and is a “bottled in bond” whiskey made from spirit distilled within a single distilling season.

The nose is smooth and subtly spiced with hints of oak, roasted almonds, maple syrup and honey at first. Spicier notes of clove, nutmeg, and allspice come alive with time in the glass. The taste is spicy and intense, as one would expect a 100% malted rye whiskey to be. Great notes of clove, allspice, and a hint of cinnamon dominate the palate, with honey, brown sugar, leather, and oak notes in the background. The finish is long, spicy, and mouthwatering. Wow! (December, 2016)