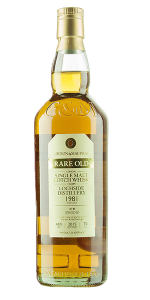 This single malt from Gordon & MacPhail’s Rare Old series comes from the old Lochside distillery in the Highlands, which closed in 1992 and was torn down several years later. The nose is woody with a touch of fresh lemon furniture polish and notes of anise, honeycomb, straw, and dried flowers. The taste is tart and fruity with lemon zest, papaya, and mango notes at first, while subtle spices build up in the background with touches of white pepper and clove. The spices linger nicely on the finish while the fruitier notes fade into the background for a very complex dram. (November, 2018)