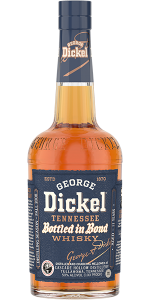 This 2020 release follows up on 2019’s debut release of George Dickel Bottled in Bond, which won numerous awards as a 13-year-old Tennessee Whiskey distilled in the fall of 2005. This release is two years younger, and was distilled during the fall distilling season of 2008. The nose has notes of molasses, dark honey, toasted caramel, and hints of cooked fruits. The taste has a nice flavor of black cherries, along with caramel cola, touches of black pepper and allspice, honey, and molasses. The finish has a lingering touch of black cherries, along with caramel and a hint of spice. Excellent! (June, 2020)