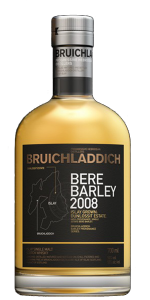 “Bere” barley is one of Scotland’s ancient grains, and is rarely used for distilling today, but Bruichladdich released two different 2008 single malts made from Bere barley. The grain for this whisky was grown on Islay’s Dunlossit Estate in 2007, while the other was made with barley grown on Orkney. The nose is sweet and malty with dried fruits, barley sugar, honey, heather, and a subtle touch of sea salt. The taste is slightly earthy and pungent without being peaty, and has notes of lemon pepper. allspice, heather, honey, and vanilla. The finish is long with a subtle tartness and lingering spices. (June, 2018)