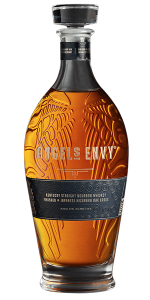 This whiskey celebrates the 10th anniversary of Lincoln and Wes Henderson filling their very first Port casks with Bourbon that would eventually become Angel’s Envy. After retiring from Brown-Forman, Lincoln Henderson worked with Suntory as a consultant and learned about the potential Mizunara Oak offered. While he wanted to make a Bourbon finished in Mizunara Oak, he died before accomplishing that goal. Wes and his son Kyle kept that dream alive, as Kyle worked with Kelvin Cooperage in Louisville to source enough Mizunara Oak for a few barrels.

The whiskey is a blend of four and nine-year-old Bourbons that were finished for two full years in Mizunara Oak, and the nose has notes of oak, pine needles, wet straw, soft spices, incense, and hints of honey and vanilla. The taste has good spices with a nice touch of garden herbs, dried fruits, pine needles, and an excellent complexity. The spices take over on the finish and linger nicely before fading away. Excellent! (July, 2020)