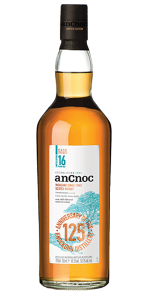 This cask-strength bottling was released to mark the 125th anniversary of Knockdhu Distillery where anCnoc is distilled, along with a heavily peated version of anCnoc. It’s matured in ex-Bourbon barrels, and the nose has notes of toasted coconut, toffee, vanilla, butterscotch, and a hint of peaches. The taste has a good balance of fruits and spices with peaches and green apples balanced by cinnamon, clove, and a hint of ginger. The finish fades away slowly with lingering spices, green apple tartness, and ginger. Nice! (January, 2020)