No Holiday At Tomatin As New Cù Bòcan Malt is Released 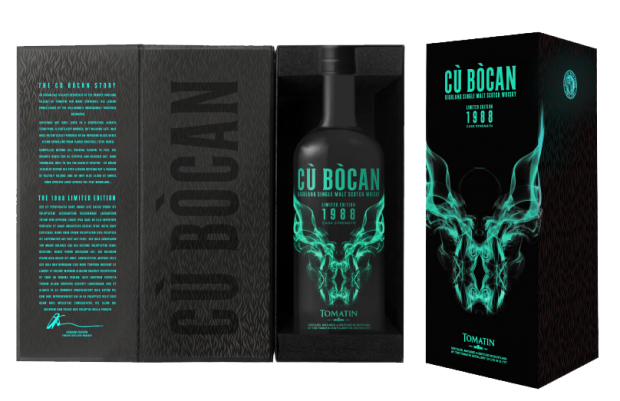 May 30, 2016 – It may be a bank holiday in the UK, but Tomatin is giving fans of its Cù Bòcan peated single malt an extra reason to celebrate today. The latest release in the Cù Bòcan series is a 1988 vintage single malt distilled December 2, 1988 and matured for 28 years in ex-Sherry butts and hogsheads previously used to mature what the distillery describes in a news release as “a popular heavily peated Islay whisky.”

Tomatin and its Japanese-based owner, Takara Shuzo, introduced the Cù Bòcan series of lightly peated Highland malts in 2013 as an alternative to the distillery’s traditionally unpeated whiskies. In addition to the standard Cù Bòcan single malt, Tomatin released a 1989 vintage expression in 2014 and distillery manager Graham Eunson created special Virgin Oak, Sherry Cask, and Bourbon Cask expressions in 2015. The whiskies take their name from a mythical creature said to have roamed the forests near the village of Tomatin, which is along Scotland’s A9 highway about 15 miles south of Inverness.