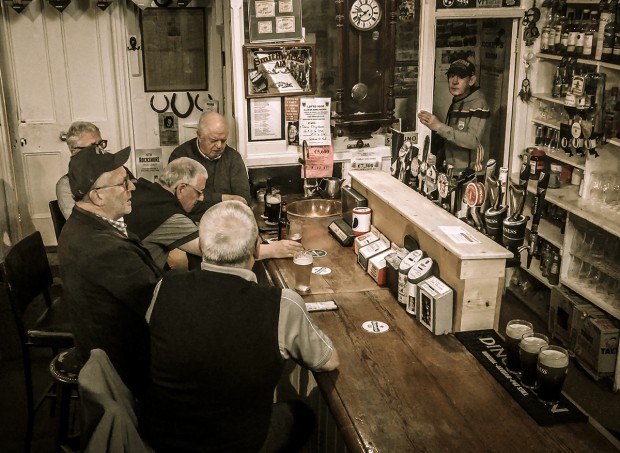 March 15, 2020 – Pubs are a way of life in Ireland, but the COVID-19 novel coronavirus pandemic has forced the Irish Government to call for a complete closing of the country’s pubs as of “last orders” tonight. The request from Taoiseach Leo Varadkar’s administration will mean a “dry” St. Patrick’s Day Tuesday, but government officials have determined that shutting down pubs until March 29 could help prevent the spread of the virus. The request is voluntary, but government officials will monitor compliance to determine whether “different measures might be required.

As of Sunday afternoon, 169 people in Ireland had tested positive for the COVID-19 virus with two deaths reported. 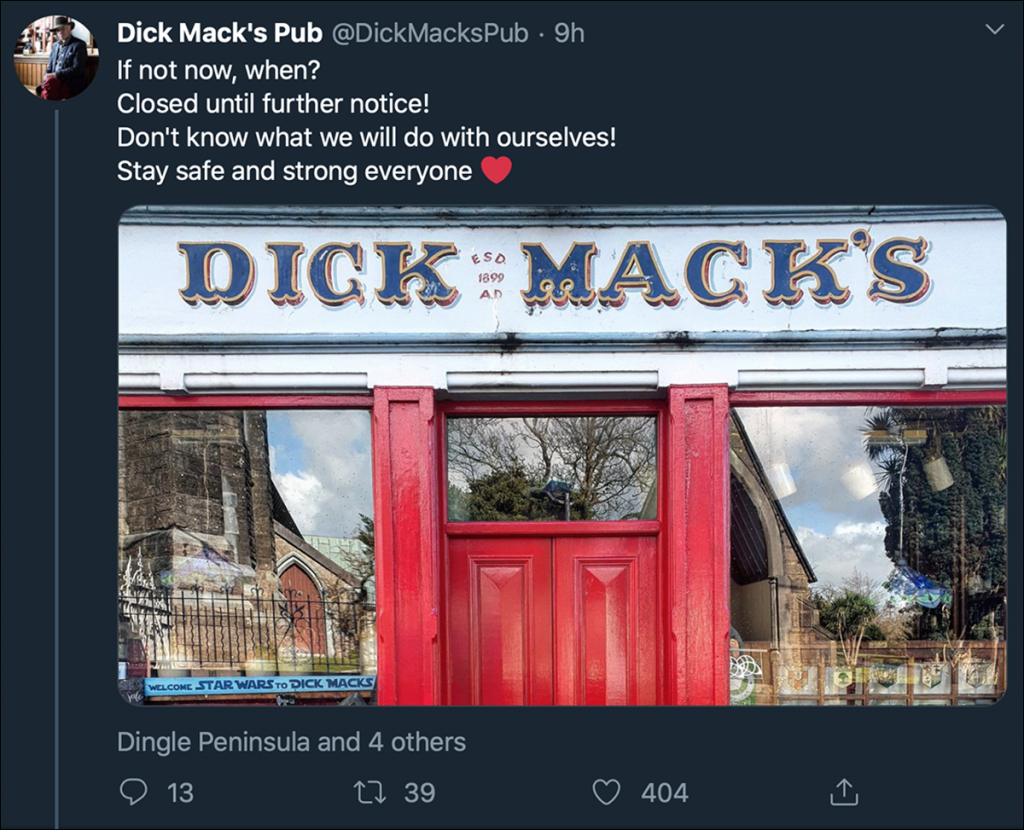 A Tweet from Dick Mack’s Pub in Dingle, Ireland announcing its temporary closing because of the coronavirus pandemic. Image courtesy Twitter.

While a number of pubs had already closed voluntarily, health officials cited “reckless behaviour by certain members of the public in certain pubs” Saturday night. News reports showing images from social media with the hashtag #CloseThePubs showed packed pubs in Dublin’s Temple Bar neighborhood and other parts of the country Saturday night. Government officials met Sunday with leaders of Dublin’s Licensed Vintners Association and the Vintners Federation of Ireland, which are urging their members to comply with the request.

Here is the complete text of the government’s statement:

Following discussions today with the Licenced Vintners Association (LVA) and the Vintners Federation of Ireland (VFI), the government is now calling on all public houses and bars (including hotel bars) to close from this evening (Sunday 15 March) until at least 29 March.

The LVA and VFI outlined the real difficulty in implementing the published Guidelines on Social Distancing in a public house setting, as pubs are specifically designed to promote social interaction in a situation where alcohol reduces personal inhibitions.

For the same reason, the government is also calling on all members of the public not to organise or participate in any parties in private houses or other venues which would put other peoples’ health at risk.

The government, having consulted with the Chief Medical Officer, believes that this is an essential public health measure given the reports of reckless behaviour by some members of the public in certain pubs last night.

While the government acknowledges that the majority of the public and pub owners are behaving responsibly, it believes it is important that all pubs are closed in advance of St. Patrick’s Day.

The Licenced Vintners Association (LVA) and the Vintners Federation of Ireland (VFI) both supported this decision and urged all their members to close in line with the government’s request.

The government and the LVA and VFI also discussed the support measures for businesses and their staff affected by the COVID-19 crisis which have been put in place last week.

The government will continue to monitor the situation, including the compliance of all pubs with this request, as well as any further or different measures which might be required in the future.

The effectiveness of the Guidelines on Social Distancing in other parts of the hospitality and leisure industry, for example restaurants and cinemas, will also be kept under review and subject to further consultation with stakeholders in the coming days.

The government had already imposed a ban on large events and gatherings of more than 100 people, and all of Ireland’s distillery visitor centers and whiskey-focused attractions have closed their doors to the public. It’s believed that the government does not have the legal authority to simply order pubs to close without legislative approval, even in a state of emergency.

The move has the potential to cause problems along the open border with Northern Ireland, where the British Government is still advising its citizens to proceed with normal daily activities for now. With pubs on that side of the border remaining open, the possibility for an increase in drunken driving exists as people search out open pubs. A spokesman for the Garda, Ireland’s national police force, told WhiskyCast in an email that “the enforcement of Road Traffic legislation, in particular drink/drug driving will continue and the management and co-ordination of same rests with the local Regional Officers.”

This story will be updated as additional details become available.

Editor’s note: This story was updated to include additional information, including a response from the Garda to our question about drunk driving enforcement.