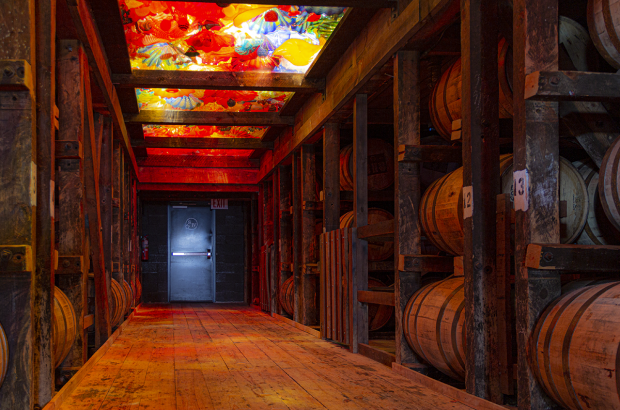 February 13, 2020 – If you build it, they will come. That applies not only to a baseball field in the middle of an Iowa corn field, but to whiskey distilleries in Kentucky – as the state’s distilleries release their 2019 Bourbon tourism numbers. The data shows a significant increase in Bourbon-related tourism throughout Kentucky, with the 37 distilleries on the Kentucky Bourbon Trail reporting a 22.8 percent increase in visitors during the year. 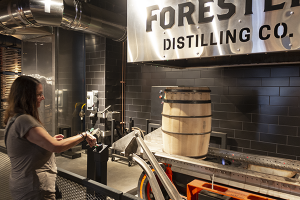 A visitor presses the button to start charring a whiskey barrel in the cooperage at the Old Forester Distillery on Whiskey Row in Louisville, Kentucky. File photo ©2020, Mark Gillespie/CaskStrength Media.

2019 was the 20th anniversary for the Bourbon Trail, and the KDA is planning a series of special events this year for the 21st anniversary as the “tour officially comes of age.” In a news release announcing the 2019 statistics, KDA executives announced plans to hold cocktail celebrations at each member distillery, along with “pop-up” events this summer at the 18 Kentucky Bourbon Trail distilleries leading up to a special event in September at the Frazier History Museum in Louisville.

In addition, Sazerac’s Buffalo Trace Distillery in Frankfort reported a 35% increase over 2018 with 293,996 visitors. Sazerac is not a member of the Kentucky Distillers Association, and its numbers are not included in the KDA’s report. It is likely that there was some overlap among tourists who visited both Buffalo Trace and distilleries along the Bourbon Trail.

Buffalo Trace has started another expansion of its visitors center, which was last expanded in 2015. Work on the project is expected to take most of the year, but will be done in stages to minimize the impact on visitors.