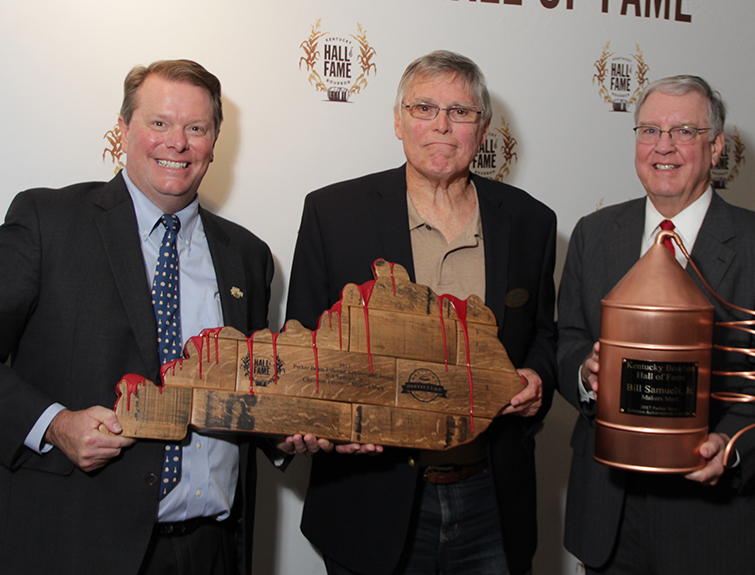 September 13, 2017 – The Kentucky Bourbon Hall of Fame has added three new members, while honoring Maker’s Mark Chairman Emeritus Bill Samuels Jr. with the Parker Beam Lifetime Achievement Award. During today’s ceremony at My Old Kentucky Home State Park in Bardstown, Brown-Forman Master Distiller Chris Morris, Beam Suntory’s Jerry Summers, and the late Harry Shapira of Heaven Hill were named to the Hall of Fame. The Hall of Fame was created by the Kentucky Distillers Association and the Kentucky Bourbon Festival in 2001 to honor individuals and organizations that have contributed to the growth of the state’s Bourbon industry.

“This year’s inductees are joined by the fact that they’re all leading figures behind the growing global renaissance of Kentucky Bourbon,” said Eric Gregory, president of the Kentucky Distillers’ Association. “Each, in their own way, has helped shape our current success.”

Samuels was a member of the Hall of Fame’s inaugural class in 2001 and was named a lifetime honorary member of the Kentucky Distillers Association’s board of directors in 2011, when he retired after 35 years as president of Maker’s Mark. He has been credited as the marketing genius behind the brand, which was created by his parents, Bill Samuels Sr. and Marjorie Samuels – both of whom are also in the Hall of Fame. He is only the third person to receive the Parker Beam Lifetime Achievement Award, named for the longtime Heaven Hill master distiller who died earlier this year after a four-year battle with ALS. Parker Beam was honored with the award in 2015, and Wild Turkey Master Distiller Jimmy Russell received it in 2016.

Chris Morris was unable to attend the ceremony after being hospitalized several days ago for heart surgery. His colleagues at Brown-Forman accepted on his behalf, and Morris is expected to make a complete recovery. He serves as Master Distiller for all of Brown-Forman’s Kentucky whiskey brands, including Woodford Reserve, Old Forester, and Early Times, and was given the title of Vice President of Whiskey Innovation in 2015. He was named Master Distiller in 2003, and developed the Woodford Reserve Master’s Collection, the Old Forester Birthday Bourbon, Woodford Reserve Double Oaked, and other expressions for the company’s portfolio. He is a former chairman of the KDA’s board, and has also served on the Bourbon Festival board.

Jerry Summers is Beam Suntory’s Director of Community Relations, and focuses on the company’s ties with its neighbors in Kentucky. He has served as chairman for both the Kentucky Bourbon Festival and the Kentucky Tourism Industry Association, along with numerous other organizations in the Bardstown/Clermont area. During his 40-year career, he served as a distiller working with Beam’s legendary master distiller, the late Booker Noe, until making the transition into his current role with the company.

Harry Shapira was a key member of Heaven Hill’s executive team for many years until his death in 2013. He was the son of David Shapira, one of the five Shapira brothers who founded Heaven Hill after the end of Prohibition, and was responsible for developing the company’s tourism program. He led the team that created the Heaven Hill Bourbon Heritage Center in Bardstown and the Evan Williams Bourbon Experience in Louisville.

The Kentucky Bourbon Hall of Fame and its inductees will be part of the new welcome center for the Kentucky Bourbon Trail to be developed at Louisville’s Frazier History Museum as part of an agreement announced last week between the KDA and the museum.