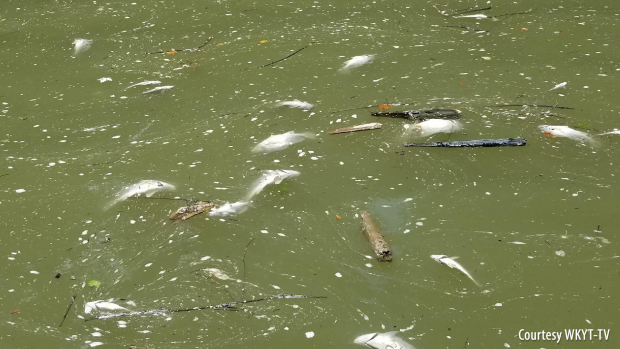 July 8, 2019 – Investigators are now looking through the rubble of a rickhouse at Beam Suntory’s Old Crow warehousing site near Versailles, Kentucky to confirm whether a lightning strike started the fire that destroyed 45,000 barrels of Jim Beam Bourbon. The fire started around midnight on Tuesday, July 2, and burned until Saturday as firefighters allowed spilled alcohol that had pooled in the warehouse’s basement substructure to burn off. There were no injuries reported from the fire.

While the investigation continues at the site that was home to the Old Crow Distillery for more than a century, state environmental officials are monitoring environmental damage downstream from a plume of alcohol that stretches more than 23 miles to the Ohio River. Spilled whiskey from the warehouse flowed into Glenns Creek, which feeds into the Kentucky River and reached the Ohio River Monday morning, according to John Mura of the Kentucky Energy & Environment Cabinet.

“We’re still trying to aerate the leading edge of the plume,” Mura said in a telephone interview. State fish and wildlife officers are reporting thousands of fish killed or dying because of a lack of oxygen in the water. “We are seeing dead fish floating on the Ohio River…people who use the river are seeing and smelling the dead fish,” Mura said, noting that the impact is on a scale similar to that from a Wild Turkey warehouse fire in 2000 when an estimated 228,000 fish were killed when whiskey flowed directly into the Kentucky River.

According to Mura, when alcohol from a warehouse accident flows into a creek or river, bacteria in the water eat the sugars in the alcohol and multiply rapidly, which robs the water of its oxygen content and causes fish to suffocate. Sampling at the trailing edge of the plume near the Old Crow site shows oxygen levels returning to near normal, and the plume is expected to dissipate quickly as it enters the Ohio River’s faster-moving currents. While the river is safe for boating, Mura said swimmers should avoid areas where there may be stagnant water or dead fish for now.

The Kentucky River also provides drinking water for Frankfort’s water utility and other systems downstream from the site, and traces of alcohol have turned up in samples of drinking water. However, Mura says tap water is safe to drink despite some residual aroma or taste. There are no “boil orders” in place, but fish from the river should not be considered safe to eat at the present time.

Mura credited Beam Suntory executives with responding quickly to the fire and the environmental issues, noting that Beam has hired two environmental contractors to respond to the spill and has been participating actively in daily meetings with state regulators. The drinks company will eventually face one fine for polluting the river system and a separate fine from the Fish & Wildlife department for the damage to fish stocks.

On Monday afternoon following the original publication of this story, Beam Suntory provided the following statement:

“With the fire extinguished and everyone safe, we are focused on minimizing and remediating environmental impacts. Since Wednesday, we have been working collaboratively with local, state and federal government agencies. In this collaborative approach, we immediately initiated actions to minimize the environmental impacts. This included deployment of aerators to support regeneration of the affected water. Once it was safe to do so, aerators were placed in the creek on Wednesday, and a barge was deployed in the Kentucky River to operate aerators late Thursday. We’ve seen oxygen levels rebound well in both waterways. We have built berms at our site, to avoid further runoff to the nearby waterways, and we are conducting water sampling and water field screening to get real time results of water quality on the river, as part of a coordinated effort. We have been informed that the situation is now sufficiently under control that the State of Kentucky is preparing to end emergency response activities and transition to longer-term, more routine monitoring. We look forward to partnering with them to protect water and the natural environment. As we focus on remediating the environmental impacts, we remain grateful for the outpouring of support we have received from the community and government partners.”

Editor’s note: This story was updated to include a statement provided by Beam Suntory.