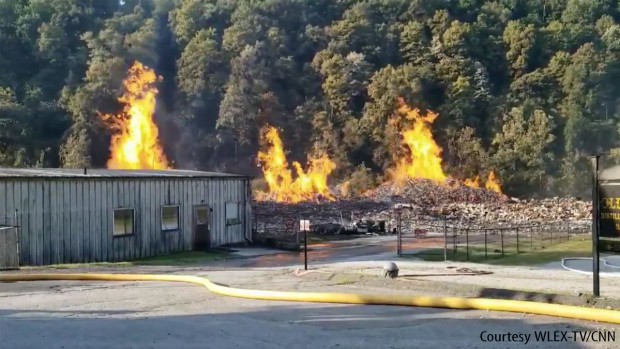 July 5, 2019 – The fire that destroyed a Jim Beam Bourbon maturation warehouse is still burning, nearly three days after it started late Tuesday night. The blaze is being fueled not only by 45,000 barrels of whiskey being stored inside the warehouse on the site of the former Old Crow Distillery near Versailles, but by the wooden structure of “ricks” that held the oak barrels in place during the years of maturation time.

Woodford County Emergency Management Director Drew Chandler says the fire will be allowed to burn itself out unless it poses a danger to other warehouses at the site. “The warehouse that collapsed has a basement substructure to it, and it is acting as a pool for some of the distillate that is still continuing to burn off,” he told WhiskyCast in a telephone interview Friday afternoon.

According to Chandler, the decision was made because flooding the structure with water could create more environmental problems. Spilled whiskey from the warehouse flowed into nearby Glenns Creek and from there into the Kentucky River, which supplies drinking water for the city of Frankfort downstream. While state and federal environmental officials are monitoring the water supply, they recommended that firefighters allow the remaining whiskey to burn off instead of risking additional contamination.

Beam Suntory, which has used the Old Crow maturation warehouses since 1987, has deployed excavating equipment to the scene to start removing barrel hoops and other debris in order to allow firefighters to better monitor the fire. The debris pile sits on top of the basement substructure, and there is no way to tell how much whiskey remains to be burned off. The company has not commented on the incident since an initial statement Wednesday morning shortly after the fire began.

There is still no word on what caused the fire, which started during a thunderstorm late Tuesday night. At its peak, the fire spread briefly to a second warehouse at the site, but firefighters were able to knock that fire down before it spread throughout the building. There was no damage reported at the Glenns Creek Distillery, which is located about 300 yards from the fire scene on 16 acres of land that was originally part of the Old Crow complex.

Chandler told WhiskyCast he was not able to get close to the scene for several hours because of the intense heat. He credited Woodford County ambulance personnel with keeping firefighters safe during the worst of the fire, which generated temperatures similar to those of aircraft accidents involving burning jet fuel.

“The firefighters were not actively fighting fire for more than a few minutes at a time, and then (the medics were) rotating them out and back in when their vital signs and hydration had occurred, contributed to no heat exhaustion injuries,” Chandler said. “The kind of protective clothing they needed to get closer than they did would be similar to what airport fire and rescue would use.”

The Old Crow site is in a rural area along McCracken Pike, and the fire did not spread to the nearby woods along Glenns Creek that sit between Old Crow and the Castle & Key Distillery less than a mile away. Castle & Key co-owner Will Arvin told WhiskyCast in an email that the fire caused no impact on operations at the distillery, which reopened in 2016 after two years of restoration work on what was known for decades as the historic Old Taylor Distillery. “The fire department was valiant at controlling a very scary situation…hoping for the best for our friends at Jim Beam,” Arvin said.

While firefighters allow the remaining whiskey to burn off, they have reopened McCracken Pike to traffic. Chandler noted that at least one Bourbon tour provider has added the fire scene to its itinerary. “There was a minibus that drove by slowly with people hanging out the windows with their cameras…ordinarily, the bus would have turned around in the parking lot at the distillery next door (Castle & Key) because this stretch of McCracken Pike really doesn’t go anywhere, but they extended their tour so the folks could see where the fire happened,” he said with a chuckle.