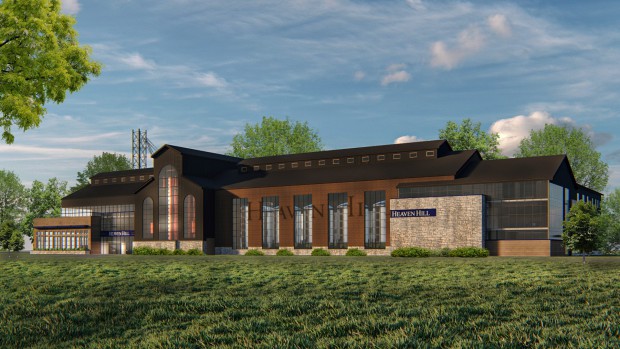 April 27, 2022 – Groundbreaking is expected in June for Heaven Hill’s return to distilling in Bardstown, Kentucky. The family-owned distiller plans to build a $135 million dollar distillery in Bardstown. When it opens in 2024, the distillery will make Heaven Hill’s first whiskey in Bardstown since the historic 1996 fire that destroyed the Shapira family’s original distillery.

The announcement comes after Tuesday night’s approval of zoning changes for the site by the Nelson County Planning Commission. The distillery will be built on a 61-acre vacant piece of land just east of Bardstown Community Park along Highway 245, just west of the proposed Kentucky Owl Park development. This represents a shift away from Heaven Hill’s main campus on Loretto Road southeast of Bardstown, home to the company’s main bottling facility and maturation warehouses along with the newly-expanded Heaven Hill Bourbon Experience visitors center.

The new distillery will complement Heaven Hill’s Bernheim Distillery in Louisville, which the company acquired after the 1996 fire and has used as its main production facility for more than 20 years. That distillery produces approximately 1,300 barrels of whiskey each day, but has little room for future growth.

“We’ve been planning for this for years, what the expansion process looked like for American whiskey long-term, and we found that Bernheim, which is more or less landlocked based on three or four expansions there, just could not contain the space that we needed to continue to expand and grow our American whiskey portfolio,” Heaven Hill spokesman Josh Hafer told WhiskyCast Thursday.

“We take great pride in being a part of the Bourbon Capital of the World,” Hafer said. “It’s where we were founded…our old distillery, our bottling operations, and a disproportionate amount of our team members are there in Bardstown and Nelson County, and so it was important for us to have this homecoming to Bardstown with this distillery because it plays such a big role in our success,” he said.

“For them to return, I think it demonstrates a very strong amount of confidence with our community that we can deliver the infrastructure that they need, the people that are available for employment, and there’s a level of trust that comes with that as well,” Bardstown Mayor Dick Heaton told WhiskyCast. “We weren’t the only community considered for the project…I know there were at least three other counties and county seats of those counties like Bardstown is for Nelson that were looked at by Heaven Hill and their team in making their decision, so I think that sends a message that we are the Bourbon Capital of the World. It’s not just something we talk about, but we have earned that reputation,” he said in a telephone interview. Heaton called the $135 million dollar project the largest single economic development project in the town’s history.

The project has also been approved for $1.5 million in economic development incentives by the Kentucky Economic Development Finance Authority on March 31. According to Heaven Hill’s application for those incentives, the new distillery is expected to create 25 new jobs when it opens and increase to 38 jobs over a ten-year period. That goes along with the company’s plans to start with an annual production capacity of 10 million proof gallons of spirit and eventually expand production to as much as 30 million gallons per year.

As of now, there are no plans to build maturation warehouses at the site. Instead, the distillery’s output will be matured at Heaven Hill’s existing warehouse sites located around the Bardstown area, including the old Schenley warehouses adjacent to the distillery site. There are also no immediate plans for a visitors center at the site, though Hafer said the distillery might one day be part of tours originating at the Heaven Hill Bourbon Experience.