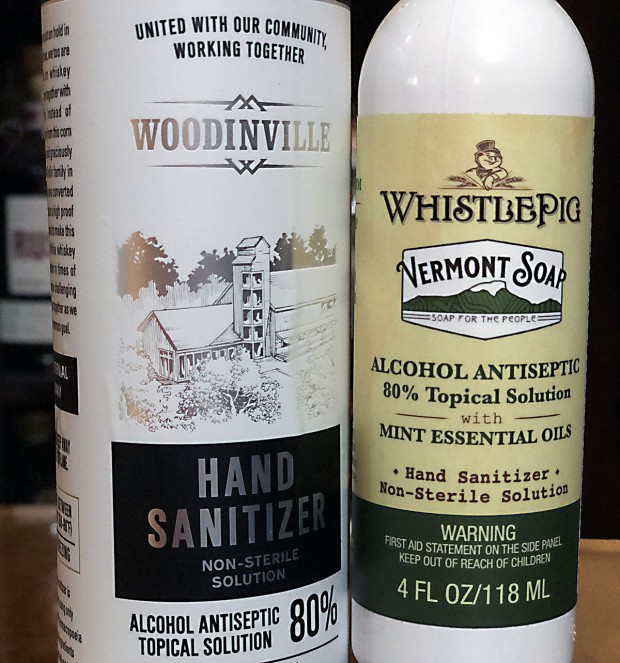 December 31, 2020 –  In March, Sagamore Spirit Distillery president Brian Treacy took a call from the Johns Hopkins Hospital with one question.

“Do you know how to make hand sanitizer?”

After checking with his production team, Treacy responded later that their equipment for distilling rye whiskey was not designed to produce the high-proof alcohol needed in hand sanitizers. The Johns Hopkins team painted a grim picture based on their discussions with colleagues on the West Coast, who were already seeing ten times the demand for hand sanitizer and no available inventory.

“The supply chain is completely eroded, there’s no hand sanitizer available on the market, and there isn’t going to be any any time soon…could you please figure it out?”

Like many distillers around the United States, Treacy and his team immediately went to work figuring it out and pivoted from producing whisky, gin, vodka, and other spirits to producing alcohol-based hand sanitizer. According to the Distilled Spirits Council of the United States, more than 800 different distilleries around the country produced hand sanitizer during the pandemic. Many donated their time, equipment, and the ingredients along with supplying their sanitizers to health care providers and first responders free of charge during the early days of the pandemic.

Months after Sagamore Spirit and many other distilleries returned to producing distilled spirits, they’re being hit with an unexpected bill. The Food and Drug Administration published a schedule of user fees for so-called “Over the Counter Monograph Drug Facilities” Tuesday in the Federal Register. Hand sanitizers are regulated by the FDA as an “over the counter” topical treatment, and the CARES Act passed by Congress in March included a provision allowing the FDA to impose annual user fees from qualifying manufacturers of monograph drugs (defined as “a nonprescription drug without an approved new drug application.”)

The fee: $14,060, along with a fee of $9,373 for facilities that produce monograph drugs under contract for export use only. The user fees are intended to raise approximately $24 million to cover the agency’s cost of overseeing the monograph drug program.

In addition, the annual fee schedule takes effect on January 1, meaning any distiller still making or selling hand sanitizer on that day will be subject to the fee unless they completely exit the sanitizer business and de-register with the FDA before the start of the new year. Since the schedule was published on December 29, distilleries had barely 48 hours to respond to an agency few of them had ever dealt with until the pandemic.

“In the last 24 hours, we started seeing notices flying around saying ‘hey, the FDA’s updating its policy,” said Phillip McDaniel of Florida’s St. Augustine Distillery and the chair of the DISCUS Craft Advisory Council. “No discussion, no explanation, no real understanding of what do we do with the inventory we have…we just got really blindsided,” he said in a telephone interview.

FDA spokesman Jeremy Kahn told WhiskyCast no one from the agency would be available for an interview, but provided the following statement:

“The FDA appreciates industry’s willingness to help supply alcohol-based hand sanitizer to the market to meet the increasing demand for these products during COVID-19, and we are grateful for their efforts. We understand the concern that manufacturers have about the fees they are being asked to pay, especially from small businesses during this difficult time. The Coronavirus Aid, Relief, and Economic Security Act (CARES Act) enacted by Congress and signed into law in March 2020, imposes user fees for fiscal year 2021 (and thereafter) to be collected from over-the-counter (OTC) monograph drug facilities, such as hand sanitizer manufacturers. The statute does not provide any waiver provisions for any specific category of manufacturer or for the deadline for assessing those fees, however we stand ready to work with Congress on ways this can be addressed. The FDA has made information regarding its planned implementation of this new user fee program publicly available on the agency’s website, beginning in May 2020. As with our other user fee programs, we anticipate that these user fees will provide additional resources to help the agency conduct our important regulatory activities in a timelier manner and ultimately help provide the public with access to innovative OTC monograph drugs.”

During the peak of the pandemic, the agency was a roadblock for distilleries who wanted to help by producing hand sanitizer that met World Health Organization global requirements. Those standards do not require the addition of “denaturing” agents that make alcohol products intended for topical use unsafe to drink, while the FDA mandates their use in topical products in the U.S. Distillers were concerned because the use of those denaturing agents in their equipment would lead to extensive cleaning processes afterward or the replacement of contaminated pipes, tanks, and other equipment. In the end, the agency held firm over strong opposition from the industry and members of Congress, while the Treasury Department’s Alcohol and Tobacco Tax & Trade Bureau (TTB) approved waivers of federal excise tax on alcohol produced for sanitizing use only if the products met FDA standards.

The regulatory move comes just days after President Donald Trump signed into law the massive year-end legislative package that included a permanent extension of a federal excise tax break that largely benefits small-scale distillers. Without that extension, many distillers were planning layoffs starting early next week facing a 400% increase in their excise tax bills starting on New Year’s Day.

“It’s absolutely the same kind of real scary challenge that not getting FET relief passed would have been,” American Craft Spirits Association president Becky Harris said. “If FET permanence hadn’t come…depending on your production level, you could be anywhere from an extra thousand dollars to an extra five thousand dollars or ten thousand dollars in excise tax just in January, and right now, everybody’s looking at an extra $14,000 fee due to the FDA, and that’s just as scary,” the co-founder of Virginia’s Catoctin Creek Distillery said in a telephone interview

Harris sees a potential for resolving the issue before anyone has to write a check, though.

“I actually got a call from the HHS (Department of Health and Human Services) Secretary’s chief of staff…HHS says they’re on it, and we have been tagging in with FDA in a number of different ways. The way I see it, and the way ACSA sees it, it’s obvious that this is a fee that the FDA has been designing for a while, and they didn’t design it thinking about thousands of small distilleries making hand sanitizer, right? They mostly deal with larger drug manufacturers, and the model they came up with is one they already use for prescription drugs,” she said, noting that the FDA just slotted distilleries making hand sanitizer into its larger model without considering the consequences.

“The scale of these operations are totally out of line with the amount of these fees,” Harris said, citing the example of a South Carolina craft distiller who makes about a gallon of hand sanitizer each month to donate to local first responders and doctors. “He’s like ‘am I gonna have to pay this fee,” and the letter of what’s been put out says yes,” she said.

While Harris remains optimistic about a resolution, WhiskyCast has started a Change.org petition aimed at persuading the FDA to waive the user fee for distillers who do not produce any other products subject to FDA regulation for over-the-counter medical use.

Editor’s note: This story was updated to include a statement from the FDA and additional clarifications, including the definition of “monograph” drugs. In addition, Sagamore Spirit and Catoctin Creek are both sponsors of WhiskyCast.