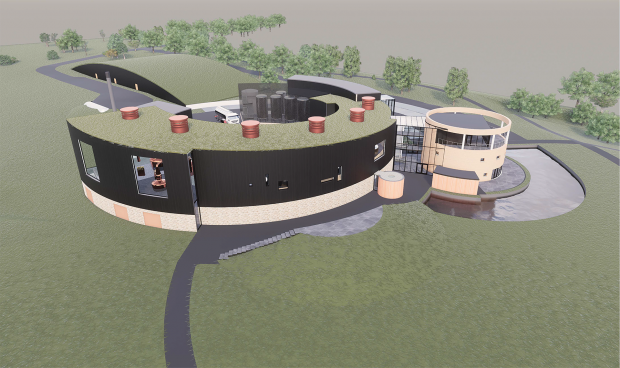 November 3, 2020 – Gordon & MacPhail’s plans for a new Speyside malt whisky distillery near Grantham-on-Spey in the Cairngorms National Park have taken a huge step forward. While construction began on the distillery site in July after being delayed due to Covid-19 health restrictions, the family-owned Scotch Whisky company has been working quietly to come up with an answer for the biggest decision they’ll make short of approving the budget for the project…the new distillery’s name. After all, that’s what historians will remember when they’re writing the 2121 edition of the Malt Whisky Yearbook.

After considering around 300 different possibilities with the Glasgow-based branding agency Good, Gordon & MacPhail settled on “The Cairn Distillery.”

“A cairn is a series of stones that are placed on top of each other, so what a wonderful opportunity to build this brand and metaphorically add a stone as we go along and and tell people about what we’re trying to do,” said Gordon & MacPhail Brands Director Ian Chapman. “We wanted it to be distinctly Scottish and very much rooted in the locale, and the locale being the Cairngorm Mountains…but we wanted it to be easy to pronounce, easy to spell, and an international flavor to it as well,” he told WhiskyCast in a telephone interview Monday. With Scotch Whisky’s popularity around the world, they wanted to make sure the name worked for consumers who don’t speak English as their native language.

Chapman also wanted to make sure the new distillery’s name complements Gordon & MacPhail’s Benromach Distillery in Forres, instead of competing with it. Benromach’s history dates back to 1898, and the distillery has a time-honored traditional style. The Cairn, on the other hand, will have a contemporary look and feel with no pagodas.

Construction is expected to be completed at some point in 2021, with the visitors center planned for a 2022 debut depending on the progress of work and pandemic-related public health restrictions that may affect the timeline.

“The investment and the building of The Cairn is really a generational legacy that will come to fruition in many, many years time,” Chapman said. The Urquhart family spent five years rebuilding Benromach after acquiring it in 1993 before re-opening the distillery, and having bottled some of the oldest single malt Scotch whiskies on record, has a track record for taking a long-term perspective.