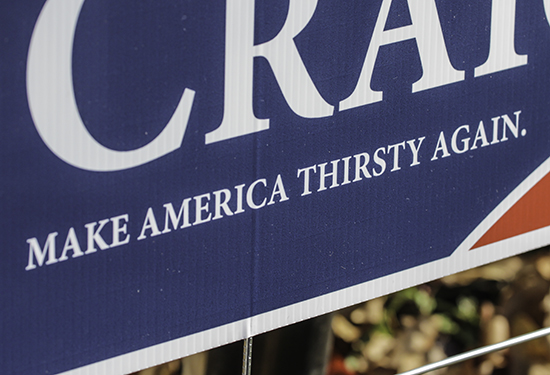 October 27, 2016 – As Americans prepare for the most contentious presidential election in recent memory, with many voters holding their noses to pick one of the two main party candidates, a new ticket is stepping forward to offer an alternative that could appeal to whiskey lovers of all parties. The Evan Williams/Elijah Craig “Make America Thirsty Again” ticket was the brainchild of Louisville advertising agency owner Hill Harcourt and local whiskey blogger Matt Evans, and features two of Kentucky’s Bourbon pioneers.

“He (Matt) made a t-shirt a couple of months back, and as a joke, I made a political sign…tweaked it a bit and printed it, and put it in his front yard when he returned from vacation,” Harcourt says. Evans posted photos of the yard sign on social media, and the campaign took off. “Heaven Hill caught wind of it, and they ordered 200 yard signs and 800 t-shirts!” The company makes both Evan Williams and Elijah Craig Bourbons, and saw the opportunity to have some fun while raising money for charity.

“That’s a good way to make America thirsty,” Heaven Hill president Max Shapira said Wednesday night at an Elijah Craig event in New York City. “You talk about history and heritage and tradition, long experience, names that are associated with quality, you couldn’t find two better names than Evan Williams and Elijah Craig.” Heaven Hill is selling the yard signs through the Evan Williams web site for $12.99 each, with proceeds to be donated to charities that benefit military veterans. According to Shapira, the site has already sold several hundred signs, and Harcourt’s Ashton Advertising agency is selling them as well.

Harcourt says the idea has become so popular that knockoffs are already appearing. “It’s all in fun…we basically were trying to figure out a third candidate based on the two choices we have right now, and not a lot of people are happy with that. It’s kind of fun seeing more of those signs that we did than Trump or Hillary ones, ’cause people are afraid to put them in their yards ’cause who knows what’s going to happen to their house.” Plans are already in the works for a post-election campaign project, but Harcourt won’t give any specifics yet.

As for Williams and Craig, a Heaven Hill news release quoted Williams as saying “In the current political climate, Rev. Craig and I believe that America’s Future is grounded in our past. As forefathers of the American Whiskey movement, we are seriously good alternatives to the current candidates.”

Editor’s note: This story was updated with original photos using a sign provided by Heaven Hill.