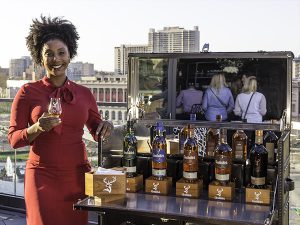 This week, we’ll talk with two people who have turned their passion for whisky into careers. Tracie Franklin is one of the newest brand ambassadors for Glenfiddich, but worked her way up through the ranks for many years before joining William Grant & Sons several months ago. Blair Bowman started a whisky club at his Scottish university, then founded World Whisky Day before becoming a writer and whisky consultant. Next month, he’ll try to set a world record by visiting 60 Scotch Whisky distilleries in a single day…just a few days before his first whisky book is published. We’ll meet them both on WhiskyCast In-Depth. In the news, Lagavulin’s 200th anniversary charity bottling raised more than $730,000 for Islay charities, while 200 bottles of Buffalo Trace’s O.F.C Vintage Bourbons raised almost $1.2 million dollars for non-profit groups in the U.S. We’ll also have details on the week’s new whiskies and an update on construction work at The Macallan’s new $245 million distillery in Scotland.