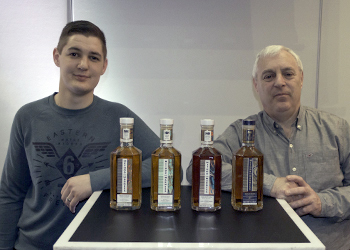 This week, we’re in Ireland for the debut of the new Method And Madness range of Irish Whiskies from Irish Distillers. The name comes from the collaboration between Midleton’s veteran masters and their apprentices, and it gives us a chance to catch up on Killian O’Mahony’s story. In September of 2013, we first met Killian shortly after he became Ireland’s first apprentice cooper in decades under the tutelage of Midleton Master Cooper Ger Buckley. Nearly four years later, his training is nearly complete, and we’ll hear from both apprentice and master on this week’s WhiskyCast In-Depth.

In the news, Scotch Whisky exports rose in 2016 after three years of declines, with single malt exports reaching an all-time record. One of Scotland’s largest trade unions is worried about the future of those exports after Brexit, and is demanding the British government protect the whisky industry’s jobs after the UK leaves the European Union. We’ll also have a sneak preview of the Old Jameson Distillery in Dublin, which is about to reopen after months of renovation with a new focus…and a new name.