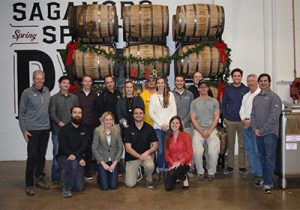 The founders of Baltimore’s Sagamore Spirits could have chosen to buy a distillery anywhere they wanted to, but they wanted to help revive Baltimore’s heritage of making Rye whiskey – and help bring a long-suffering waterfront neighborhood back to life. Sagamore Spirit’s new distillery will open next month, and this week, a new cask-strength version of Sagamore Spirit Rye was unveiled to go along with the original version that made its debut earlier this year. We’ll talk with Sagamore Spirit’s Brian Treacy on this week’s WhiskyCast In-Depth, along with Sazerac CEO Mark Brown, who finished off his year with more acquisitions. Sazerac has bought the Tennessee distillery built to make Popcorn Sutton moonshine, and will begin a long-term project to enter the Tennessee Whiskey business. In the news, yet another distillery has been sold, with Australia’s Tasmania Distillery changing hands – and name. It’ll share the name of its award-winning Sullivan’s Cove single malt whisky, and distillery manager Patrick Maguire will explain the reasons behind the sale and why he’s staying on under the new ownership.