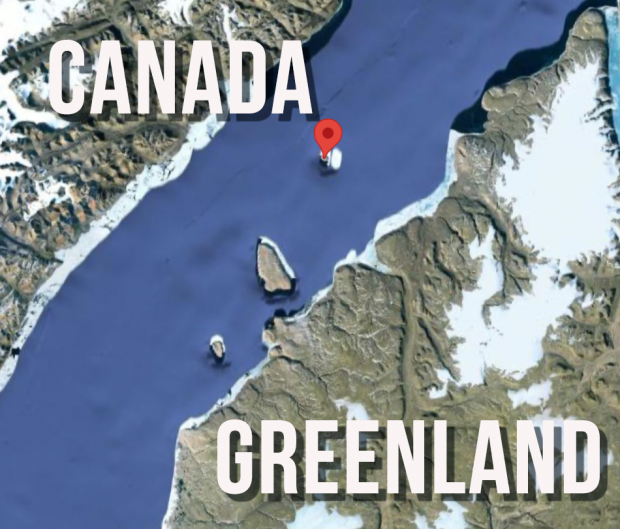 February 16, 2022 – Hans Island sounds like the name of the villain in a James Bond movie, but it’s actually more like a lair for a Bond villain. It’s a small island in the North Atlantic on the border between Canada and Greenland, and has been the subject of a low-key diplomatic dispute between Canada and Denmark for decades.

Both sides claim sovereignty over Hans Island, but the dispute escalated in 1984 when Canadian soldiers “invaded” the island, planted the Maple Leaf flag, and left behind a bottle of Canadian Whisky. Denmark’s minister for Greenland followed up on that visit with a mission of his own to replace the Canadian flag with Denmark’s and the whisky with a bottle of schnapps. Ever since then, the two sides have regularly visited Hans Island to re-stake their claim to ownership while diplomats have tried and failed to come up with a resolution.

Now, Denmark’s Stauning Distillery is upping the ante. It’s one of nine whisky distillers in Denmark, and is threatening to stop production unless both sides come to an agreement.

“We don’t care who actually gets what, or if there’s a line down the middle or if  it’s owned for half of the year or whatever the solution is, but it’s more the symbol of not being able to agree to something,” says Stauning’s Rasmus Bendtsen. He describes both countries as “peace-loving” and the conflict as calm, but with climate change increasing the potential for mineral exploration on Hans Island, he said in a Zoom interview that now is the time to resolve the dispute.

“Even as it is charming, what would happen if one day, one of the nations came and found a bottle of vodka, or mezcal, or Champagne or anything else, because now with climate change, the whole region will become much more important,” he said.

Bendtsen and his colleagues are threatening to stop production on World Whisky Day (May 21), and want other distillers to join them in a #WhiskyPeace movement. They have offered the use of the distillery as a place for negotiations between Canadian and Danish diplomats. Bendtsen and his colleagues have already been invited to the Canadian Embassy in Copenhagen, where they were told that the Canadian government endorsed their calls for a resolution and told them talks remain active between the two countries. However, they have not heard yet from their own government.

Ironically, the Danes have never left a bottle of Stauning or any other Danish whisky on Hans Island. That’s because when the dispute started, there were no active whisky distilleries in Denmark.

12 months ago No Comments